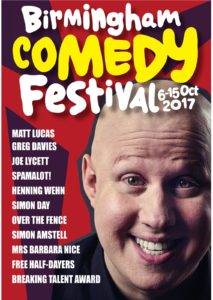 Five of the best new and emerging comedians from the West Midlands region are in the running for the fourth Birmingham Comedy Festival Breaking Talent Award.

The prestigious annual competition aims to recognise and support breaking talent from the region, offering the winner a vital step-up on the comedy career ladder.

A collaboration between Birmingham Comedy Festival and The Glee Club, the award officially kicks off the ten-day festival on Friday 6th October.

Having grown up in Huddersfield, Alex Black moved to the Midlands as a student and now resides in Hollywood, south Birmingham. He’s been doing stand-up for two years, having been inspired by the likes of The Fast Show, Dylan Moran, Tommy Tiernan, Ross Noble and Bill Bailey. “I’m a musical comedian, telling stories about losing my youth set to the soundtrack of my long-gone teens,” he says.

Wednesbury-based examinations officer Rob Kemp started his stand-up journey nearly six years ago. His second one-man show, The Elvis Dead, mashed-up horror flick Evil Dead 2 and the hits of Elvis Presley, to become a runaway cult hit at this year’s Edinburgh Fringe. An admirer of Eddie Izzard, the Pythons, Dylan Moran and Daniel Kitson, his comedic style has been described as “quite smart” and “fairly leftfield confused whimsy.”

Eric Rushton hails from Stone, Staffordshire, and made his stand-up debut with Warwick Comedy Society during his first year at the University Of Warwick. “Terminally unemployed” he reached the finals of the Chortle Student Comedy Award 2016 and So You Think You’re Funny? in 2017. “My material is quite self-deprecating and depressing, with a little a bit of silliness to compensate for all the moaning,” he says.

Born in Handsworth, Kai Samra grew up in Leamington Spa. Though he only started stand-up in 2016, he’s already opened for such acts as Paul Chowdhry (in front of 2,000 people). Kai describes himself as “an observational comic who tackles issues such as class, race and modern culture from a fresh perspective.”

The five acts were nominated by a panel of comedy professionals based on live performances over the previous year.

A spokesperson for Birmingham Comedy Festival said: “The award features some of the very best talent from across the West Midlands, acts who are either in the early stages of their careers and show real promise, or who’ve seriously upped their game during the last 12 months.

“With observational, music and character comedy, this is our most varied Breaking Talent line-up, so it’s going to be a really fantastic show. We wish all the acts the very best of luck but, of course, there can only be one winner …”

The Birmingham Comedy Festival Breaking Talent Award 2017, in association with Edinburgh Gin, takes place at The Glee Club, Birmingham, on Friday 6th October. The night is compered by James Cook and closes with a set from Lost Voice Guy. Tickets £11 (£7 NUS) from 0871 472 0400. For more information see: www.bhamcomfest.co.uk​