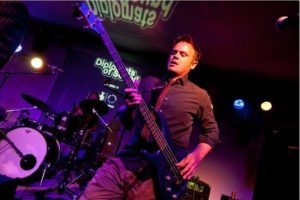 A building services consultant from Halesowen is to strum up funds towards a charity bike ride through South East Asia by performing with a rock and roll band. Scott Lydon, 40, will join fellow building and construction industry professionals in the Midlands-based covers group Under Construction for a concert in aid of a cancer charity at the Actress & Bishop in Birmingham on September 6th.

An accomplished bass guitarist who has played in bands since his teens, the Divisional Director for Clancy Consulting in Birmingham performs regularly with Under Construction alongside Mike Bates, Steve Handley, Nik Owen-Jones and Mike Lally.

The proceeds from the charity performance will go towards the £3,000 that Scott aims to raise as his individual target from an epic 300-mile cycle ride from Saigon in Vietnam to Ankor Wat in Cambodia in aid of Challenge Cancer UK.

He will take part in the eight-day ride, starting on October 28, as one of 18 members of Team Coolair who will also include Simon Seaton-Smith, a Director of building services consultants Couch Perry Wilkes, who has helped organise the concert. The team will be led by one of Scott’s business clients Neil Gibbard, Regional Director at the Cannock office of air conditioning installation specialist Coolair Equipment Ltd.

Scott has been cycling ten miles along canal towpaths and back streets to and from work each day to help prepare for the narrow paths and unmade tracks on the route, which will also have to be tackled in stifling heat and humidity.

“I have added commuting to work by bike to the weekend hill and distance biking that had already given me a base level of mileage,” said Scott, whose experience of cancer in his family was the driver behind his participation.

“My dad battled prostate cancer not too long ago and I remember all too well the uncertainty and worry that accompanies the countless operations, hospital treatments and medications that cancer often requires. It tests us all, and I imagine this is a similar story for many. Knowing that the turn of each pedal and each drop of sweat in the high temperatures and humidity of Vietnam and Cambodia might go some way to funding the fight against this disease that affects so many of us makes this incredible challenge all the more worthwhile.”

Team Leader Neil Gibbard commented: “It’s brilliant that Scott and the other members of Under Construction are holding a special live music night to support our fundraising efforts. I hope as many as possible will attend what promises to be a great night of rock and pop at a great venue.”

Under Construction will be performing in aid of Challenge Cancer UK at the Actress & Bishop in Ludgate Hill, Birmingham on Wednesday, September 6th. Doors open at 7:30pm. Tickets priced at £10 are available from Tracey Robinson at [email protected]p.com or from Scott himself at [email protected].