Artix Arts Centre in Bromsgrove has a mixed programme coming up.

From Tuesday 13th until Saturday 17th June, the award-winning play One Man Two Guvnors, a runaway hit both in London’s West End and on Broadway will be playing at Artrix. this tale of small-time gangsters gave James Corden a Tony and isperformed by All and Sundry, featuring Worcestershire rock band The Fidgets. One Man Two Guvnors is recommended for ages 14+.

Ayesha Hazarika started her career as a stand-up comedian playing clubs across the country. She then took a natural diversion into the Labour Party as a Special Adviser working for Gordon Brown, Harriet Harman and Ed Miliband. Since leaving front line politics she’s become a much sought after commentator writing for the FT, Guardian, Evening Standard, New Statesman and Grazia. Ayesha has also returned to her stand-up roots. Further credits include regular appearances on TV.

In State of the Nation on Saturday 17th June Ayesha lifts the lid on what life’s really like behind the scenes at Westminster with brutal honesty and humour and asks what’s next for British politics.

Critically acclaimed character comedian Alice Marshall returns with Blood, the follow-up to her smash-hit 2016 debut Vicious. With more of her signature weird & wonderful characters, Blood takes a long, hard look at the darker side of humanity. Featuring returning favourites and brand new faces, Blood is a character show with serious bite. 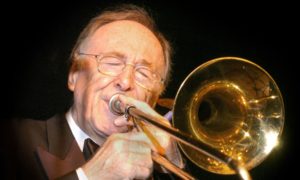 Jazz legend Chris Barber celebrates his 68th anniversary as a band leader ith a Europe-wide concert tour and it comes to Artrix on Saturday 1st July. Inspired by the King Oliver Creole Jazz Band, Chris formed his first band at the age of nineteen and has since gone on to become a bona fide jazz legend

With his ten-piece band, Chris plays a selection of his favourite music: From his roots in New Orleans style to the early music of Duke Ellington and Sidney Bechet and back, the Big Chris Barber Band combine all these ingredients into an exciting, and often moving, evening of world-class jazz.

Tickets for all shows are available from the Box Office on 01527 577330 or by visiting www.artrix.co.uk.