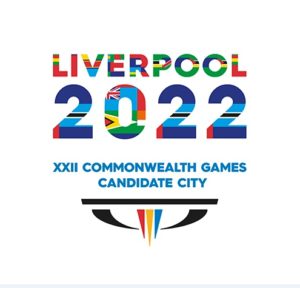 It’s a two-way contest between Liverpool and Birmingham to secure the UK nomination to be host city for the 2022 Commonwealth Games and whilst Birmingham is expected to announce key details of its bid soon, Liverpool went public with many of its plans earlier this month.

Centrepiece of Liverpool’s proposals is to use the planned new stadium for Everton FC, located around two miles north of the city centre at Bramley-Moore Dock, for most of the athletics events. A temporary running track would be installed at the £300 million venue, scheduled to open in 2021, with capacity for the Games expected to be over 40,000.

It’s one of several eye-catching Games venues located alongside the river Mersey, where the £5.5 billion Liverpool Waters regeneration project is either built, underway or planned. Aquatics would take place at a new 50m pool and diving facility (accommodating 5,000 spectators) fronting the Mersey and offering views across the Pier Head and Albert Dock. Following the Games this would be converted into a lido.

Another idea is to stage some field athletic events (long jump, triple jump and pole vault) at Mann Island, also part of the city’s former docks, allowing the public to get closer to events that can easily become ‘lost’ in a conventional athletics stadium, where they often take place concurrent with track events.

Also part of this waterfront cluster, the Arena and Convention Centre, Liverpool (comprising the 11,000 capacity Echo Arena, BT Convention Centre and Exhibition Centre) would host badminton, gymnastics, judo, netball and wrestling, whilst the athlete’s village (housing 5,000 competitors) is to be constructed at Nelson Dock, adjacent to the proposed new Everton stadium. As one might expect this would provide the city with additional housing stock after the Games.

The opening ceremony (plus rugby sevens) is proposed to take place at Anfield (another 50,000+ capacity venue), whilst Everton’s current home, Goodison Park, would stage boxing. Stanley Park, opened in 1870 and located between the two football grounds, would host lawn bowls. Together, these three venues form the Stanley Park cluster.

The neo-classical Grade 1 listed St. George’s Hall (a Victorian events and exhibition space near the central railway station in Lime Street) is the proposed home to the squash finals, whilst another historic venue, the Liverpool Olympia (dating from 1905) is set to feature weightlifting and powerlifting. Hockey would take place at Wyncote Park Playing Fields.

Liverpool plans to partially co-host the Games with Manchester, with the 2002 Commonwealth Games hosts scheduled to stage track cycling at the National Cycling Centre, squash at the National Squash Centre and T20 cricket at Lancashire CCC’s Old Trafford ground.

Former FA Chief Executive Brian Barwick has been appointed as Liverpool 2022’s Bid Chairman; Barwick was previously head of BBC sport and Controller of ITV Sport and is currently chairman of both the Rugby League and Super League Europe.

Liverpool describes its plans as bold, innovative and transformative, with the phrase ‘low cost, low risk’ nowhere to be found. They are certainly formidable and the city claims that a successful bid would accelerate over £1 billion worth of regeneration projects by up to a decade. Bid organisers have yet to confirm how much staging the Games will cost, although the Liverpool Echo has suggested a figure of £672 million, of which £547 million would come from public funding, including £137 million from LCC’s Invest to Earn fund.

With important aspects of Birmingham’s bid not yet announced it is difficult to make comparisons between the two contenders and the decision on who will be England’s candidate (and later on the 2022 Games host itself) will be determined by numerous factors that go beyond the spectacular and expensive. Good political connections, a convincing, financially plausible and deliverable bid proposal, maybe just being the right city at the right time, all could be crucial in deciding who is selected.

And who knows whether that means Birmingham or Liverpool, or ultimately neither?