Businesses across Birmingham took to the canal at Brindleyplace this weekend for the 18th annual Dragonboat Race in an attempt to raise a record-breaking £100,000 for Cure Leukaemia, with thousands of people turning up to show their support.

Storming their way through in Star Wars themed fancy dress, Kind Consultancy’s Kind of a New Hope were announced as the overall Dragonboat Race winners after a close finale, beating Colliers McBoatface team by seconds. 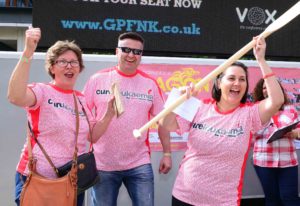 Genting International Casino made a splash early on when they capsized into the canal during their first race; the third year in a row that a team has ended up in the water, however, it was Cure Leukaemia (pictured) who took home the Paddle of Pity for 2017.

Nathan Sanghera, Marketing and Events Executive at Brindleyplace, said: “The Brindleyplace Dragonboat Race 2017 was a huge success and over 15,000 people turned up to cheer on the teams and enjoy the market, watch the traditional Chinese lion dancing and take part in all the family-friendly activities on offer.

“We had some great fancy dress this year, not just from the businesses taking part but from our younger visitors as well and it was great to see penguins come together with princesses, superheroes and Spartans for such a fantastic cause. All the teams involved have been hard at work fundraising for Cure Leukaemia and, combined with the support of the public, we’re hoping to raise a record amount this year.”

The event raised over £70,000 for Cure Leukaemia in 2016 and, with donations still flooding in, Brindleyplace is hoping to raise a record £100,000 this year as part of Cure Leukaemia’s £1 million Centre Appeal for the expansion of the Centre for Clinical Haematology, doubling the facility’s capacity for patients and clinical trials.

Brindleyplace is now counting down to a summer of free events, including the Wimbledon Finals screening and the Outdoor Film Festival which starts on Monday 17th July.