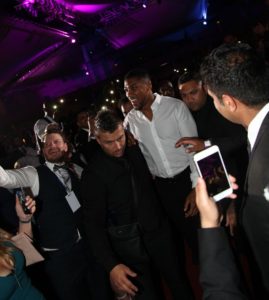 With the event selling over 700 tickets, guests got up close and personal with the phenomenon of world boxing, Anthony Joshua, at the ICC Birmingham while enjoying an evening of South American extravaganza and colour with samba dancers and drummers, flamboyant costumes and Brazilian carnival dancers.

The world heavyweight champion was live and unscripted on stage for an exclusive interview with Gareth A Davis, sharing his personal story as he discussed his upbringing and formative years in Watford and the brushes with the dark side of urban life. He went on to discuss the move into boxing and the discipline neeed to keep his childhood friends and family as part of his inner circle today. Joshua touched upon his take of celebrity since his career orbited after becoming world champion and the need to keep a focus on reality. He even discussed more personal issues about his sex life and his love for the streets of Watford and London!

Members of the audience had the opportunity to ask Joshua questions at the end of the interview and young people specifically asked him for career advice.

VIP’s were treated to a special meet and greet where they took selfies, as well as an exotic three course meal and guests who purchased special ticket types were able to have their photo with the champ as part of their ticket package as welll as receiving a signed glove as a momento of the occasion. The unified belt holder was presented with a giant celebration cake at this Brazilian-themed carnival with Indian dhol drummers, playing to the samba beat. Carnival dancers even got Anthony up to practice some samba moves for the audience.

Shani Dhanda, Event Manager from Social Butterfly Events and Travel said, “This event was influenced by a mix of cultures, which truly reflects just how multicultural and creative Birmingham really is. In a time of our country reacting to recent incidents with togetherness, it’s amazing too see just how many people have attended in Birmingham tonight, to show their support to such an inspiring yet humble world champion whilst raising money for some local cause worthy charities. We worked closely with ICC to ensure extra security measures were in place, as safety at our events is our main priority.”

Proceeds from the stunning memorabilia auction are being split between Crisis and Love Brum.

Andy Sahota from Showfighter, the Wolverhampton-based promotion company, said: “We are honoured to bring the world champ to the second city, just over five weeks after his victory against Wladimir Klitschko. Over 700 fans have turned out to meet Anthony tonight and he has loved every minute of our Samba Carnival which turned into his celebration party.

“Following on from the undeniable success of the Floyd Mayweather event in March, we are continuing to put Birmingham and the West Midlands on the map for high profile yet affordable events for all audiences.”