Don Letts has had an extensive and colourful life. Growing up in south London, he survived the racial tensions of his youth to become a Rastafarian punk devotee, credited with pioneering the alliance between punk and reggae. He was DJ at iconic venue the Roxy, became friends with Bob Marley, made many films including the Grammy-winning Westway to the World about the Clash, whose early videos were Letts productions and with whose guitarist Mick Jones he collaborated in the band Big Audio Dynamite.

He continues to make documentaries about the music and the cultural styles that have inspired his life and he also has a BBC Radio 6 show Culture Clash Radio, which has been running for almost ten years. This has in turn inspired the album of the same name, released this week, which contains songs that have influenced Don’s life.

All of which might make it a bit fatuous to ask him what he’s doing now.

“That’s a good question. As always I’m hustling, like everyboy else. It’s a slightly glamorous hustle, I have to say. I’m still juggling the film and I’m doing my weekly radio show, which I enjoy. I’ve recently had a documentary on Sky Arts called Two Sevens Clash, about the myth and the reality of the punky reggae party. The DJ festival season is kicking in so I’m off to Liverpool on Saturday for their Positive Vibration Reggae Festival and I’ve got a new compilation album out. That’s about it.”

The album, Don Letts Presents Culture Clash Radio. There’s some quite different stuff on there. 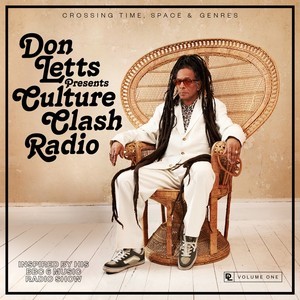 “You think so? It’s what’s on the show. People have this idea that I’m into reggae or punk all day long but in my experience the only people that listen to one kind of music are ten year olds. Most people have varied tastes and I think my music is a product of my existence, my duality is black and British, it’s about being free and changing peoples perceptions of what they think I’m about.”

People who’ve heard of Don Letts and what you do might not think you’d choose Summer the First Time by Bobby Goldsboro.

“Aaah, I love that song. You got to put it in context. There’s a lot of old stuff, it’s like my radio show, the selection crosses time, space and genre. I grew up listening to radio, that’s why I enjoy doing my show so much and that was a time when you didn’t know what these artists looked like. There were no photos in the newspapers, no social media and all that nonsense, you just had what you heard coming over the radio and the rest was left to your imagination. I was listening in a flat in south London and these songs were the gateway to new worlds and new experiences. I was in my early teens when I heard that one and it probably appealed to my, how can I put it, budding sexuality. But musically, I appreciate the craft of songwriting and that song in particular is like a little movie in its production and its lyrics.”

And Question, by Brummie legends the Moody Blues.

“A lot of people think I’m choosing stuff I should be railing against but again in the context of when I first heard that, around 1970,’71, I was about 14 and there was a lot going on around that time. Coming out of the radio it sounded magnificent. I’m not trying to justify any of these songs, music’s a very personal thing. It’s a very personal and intuitive thing and I can’t be arsed to convince anybody that they should like it.

“Music either strikes a chord or it doesn’t and it’s all about taste. Lucky I’ve got some. I didn’t know where they came from, who they were, what they wore. It was coming out of the radio so they had to strike you on an instinctive level. Now you can’t get away from some people, the cult of celebrity.”

Radio does that. It’s got a greater atmosphere than any other medium.

“It allows you to fill in the gaps. You can also be doing something else while you’re taking in information, which is a major bonus. That’s why it’s having a resurgence, with internet stations and all the rest of it. I’m so glad to be part of that whole world of radio. Back in the day I used to make mix tapes that I gave to people like the Clash and the Pistols and this is a way of continuing that tradition.”

Growing up as a skinhead, or rather a rude boy, in Stockwell, would have been a formative experience in your musical education.

“My dad had a sound system so Jamaican music was always there. In Jamaican culture everyone does music so it’s just there. For about three years I was the only black kid in my school so I was the only one with this stuff and I’m also listening to the Who and the Kinks and I’m getting off on guitar riffs, and that tells me who I am with this culture clash. I don’t find it strange at all. I was born in 1956, I’m as old as rock’n’roll, I was growing up in a very different time, when the racial climate was very tense with Enoch Powell’s rivers of blood speech. I guess I’m an anomaly but I’ve given up thinking about it. I’ve never been comfortable being defined by my colour and I wouldn’t have it any other way.”

There’s a couple of things missing off the album, Bob Marley and the Clash being the two most obvious.

“I’m not being funny but anybody who knows Don Letts would think that’s to be expected. People I talk to are into that stuff so I want the unexpected, like the show is, and not playing to their perceptions. It’s not a premeditated thing, I am what I am. Purists scare me, I’m glad they’re there in the background but they scare me. You’re as old as the music you’re listening to.”

One question I have to ask as you knew them better than most. Would the Clash have reformed had Joe Strummer lived?

“Joe was okay about it, it was Paul who didn’t want it. But it’s not about longevity, you get one opportunity in life and you use it to the best of your ability then you move on and let someone else have a go. Quite often you overstay your welcome and you spoil your own legacy. Some bands get it right but not many.”

You’ve spent your career around some of the biggest legends in music and helped cement their legacy. Do you ever stop and think “Did I really do that?”

“Not really until I had to write the sleeve notes for the album. I didn’t know what to write so I looked at my journey in music and when I started to write it in a list I thought shit, this is just incredible. Until three months ago when I did that I’d never been able to afford to stop and think. Although on the face of it it looks good I’m still hustling like everybody else. The reality is, I’ve still got an Oyster card, that’s the reality of Don Letts but I’ve always appreciated that I make a living doing something I enjoy and I don’t take that for granted.

“But these sleeve notes, I looked at my journey and yes, I thought what what a trip. I made some money but I’m not bothered about that, what I’ve got is a different kind of wealth. My journey – wow, what a trip. and I’ve never stopped. I’ve still got a foot in the door. I’m still trying to go where no man has gone before…”

You talked about Two Sevens Clash. Are you having much to do with the current fortieth anniversary of punk?

“That got messed up. Some say it was last year because that’s when it started but for everybody I know ’77 was when it all came together. It was a damp squib last year that took the wind out of this year. Thinking about the anniversary gave me the chance to look back in my archives and I realised I had all this footage nobody had ever seen that tells the story of the punky reggae party. It’s all from back in the day and that went into the Two Sevens Clash film which Sky subtitled Dread Meets the Punk Rockers. I do have a problem with it because punk was never something to look back on. It was always something to look forward. All I learned back then, the DIY ethic, it still works for me.

“People think punk began and ended in the late seventies but it didn’t. The attitudes predate ’77 and predate music but what came in was the spirit, a realisation that anyone could be part of this scene. Before then it was something that other people did but that hands-on DIY thing is in the ongoing heritage and focusing on 1977 trivialises what is a much bigger idea.”

It’s been said that you’ve always been in the right place at the right time.

“That’s because I’ve got taste. How else would you account for that? As Joe Strummer wrote, my bullshit detector is finely tuned.”

You’ve said where you are today, which is the right place, but where are you going to be tomorrow?

“I just answered the question – in the right place. I know where I hope to be, but I’m in Liverpool on Saturday, then I’m off to Brazil and then it’s Glastonbury. It’s all work, which as we’ve established is a fortunate thing. I haven’t been on holiday for nine years. I’m not moaning, I’ve been to a lot of places but not on holiday. Always the right places.”