Richard Lutz takes his pew for the anthemic play about a kid who plays a mean pinball.

Tommy, the rock opera, is a play of two halves. The first is pre-interval, where hard, relentless Who songs drive the story forward with classics like Pinball Wizard, Uncle Ernie and Tommy, Can You Hear Me?

The production, at the Birmingham Rep, has admirable intentions. It’s staged by Ramps on the Moon, a company that stages theatre for and by the disabled. And there’s a hard-working cast here that never seems to be off the stage.

The main characters, Tommy and his mother Nora, are played by speechless actors – William Grint and Donna Mullings- who are superbly back-voiced by a highly polished crew of singers (as above).

The whole production of The Who’s Tommy, in fact, is crafted so that any disabled person can enjoy it and enjoy performing in it. There is sign language, subtitles for every song and audio enhancement. Commendable if not laudatory. 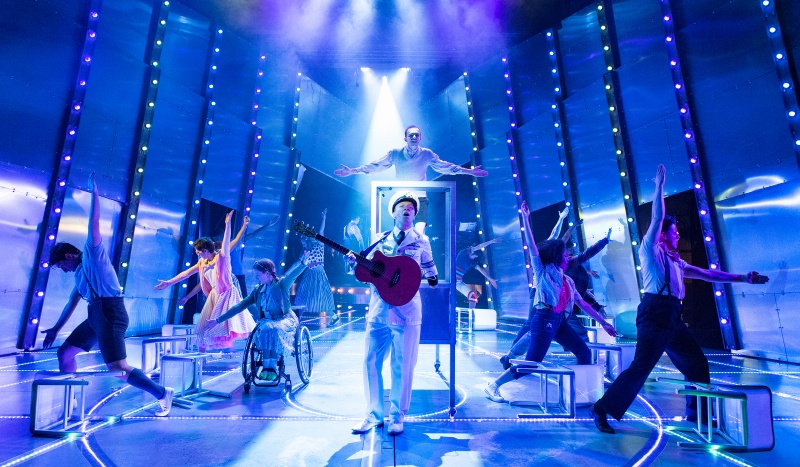 Excellent work is delivered, especially from Shekinah McFarlane as the voice of mother Nora and Gerry Robson as grubby paedophiliac Uncle Ernie who, from his wheelchair, has a leer that should frighten anyone.

Added to this are solid acting from Lukus Alexander as violent Cousin Kevin and Alim Jayd  as stepfather Frank, who injects a subtle note of undying loyalty in the role.

Set design is world-class with metallic angular walls used to frame the fractured world of the “deaf dumb and blind kid who sure plays a mean pinball” and five stars also to the backing group who are fundamental to this forty year-old anthem songfest.

But the elemental structural weakness remains. The second half simply drags, it needs the reprise of two songs in an attempt to prop it up.

And that’s a sad note because the cast are top class with voices to bring down The Rep’s rafters.

3 thoughts on “Tommy: relentless songs that run out of puff”