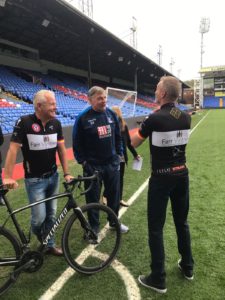 On Thursday May 4th 2017, five amateur cyclists led by former England and Crystal Palace footballer, and blood cancer survivor, Geoff Thomas will begin the Geoff Thomas Three Tours Challenge, a monumental challenge that will see the team cycle the three Grand Tours; the Giro D’Italia, Le Tour de France and La Vuelta a España consecutively, one day ahead of the professionals.

Only 39 professional cyclists and, to date, no amateur team have ever achieved this epic feat in the same calendar year. Each rider will cycle a total of 10,504km in just 63 days of cycling.

The driving force and purpose behind the team is their aim to help blood cancer charity Cure Leukaemia raise an additional £1m in 2017 to fully fund the expansion of the globally significant Centre for Clinical Haematology at the Queen Elizabeth Hospital in Birmingham. This transformational development will double the Centre’s capacity for patients, clinical trials and specialist clinicians. Not only will the expanded Centre immediately save more lives but it will also hasten global progress towards finding effective treatments for all blood cancers within twenty-five years. The £3.2 million project has already received over £2 million from local government and Cure Leukaemia must raise the additional funds by 31st December 2017.

Geoff and the team are able to take on this challenge thanks to the generous donations of the Geoff Thomas Three Tours Challenge sponsors. Chief among these are Crystal Palace and headline partner Farr Vintners, the London-based retailers of the world’s greatest wines.

The Farr Vintners Chairman is the former Crystal Palace FC shareholder and life-long fan, Stephen Browett. Farr Vintners have donated £100,000 towards the challenge.

Stephen Browett, said: “Farr Vintners is delighted to be supporting Geoff Thomas in his Three Tours Challenge. Geoff was a legendary Captain of Crystal Palace Football Club and his continued fundraising for Cure Leukaemia, including this epic cycling marathon, is inspirational to us all.”

Further support, has come from the Crystal Palace FC family, who upon hearing of Geoff’s latest challenge, were determined to do their bit to support their former captain and his latest fundraising efforts.

Steve Parish, the Crystal Palace FC chairman, said, “Geoff is very much part of the Crystal Palace family and we are proud of his determination and courage to beat his battle with blood cancer. We are delighted to be supporting him and have no doubt that he will complete this immense cycling challenge. Knowing so few professional cyclists have conquered this feat, this is going to be Geoff’s greatest sporting challenge.”

Further support from Crystal Palace FC, came from team manager Sam Allardyce, who, speaking during a team training session at Selhurst Park on Friday 28th April, said: “It’s a scary challenge. I just hope he gets the publicity and the support that taking on such a huge task deserves. For what he [Geoff] is doing, it should not just be a few hundred thousand; for me it should be a few million.”

Cure Leukaemia is a charity that is particularly close to the heart of many within the Crystal Palace FC family, and for good reason. Geoff Thomas was diagnosed with chronic myeloid leukaemia in 2003 and, after having his life saved by the charity’s co-founder Professor Charlie Craddock CBE, Geoff has been a staunch fundraiser and Patron ever since. Geoff has completed Le Tour de France on three previous occasions and this year’s instalment, The Three Tours Challenge, will be Geoff’s swansong, in which he will ride further than he has ever done before, to raise as many funds as possible for Cure Leukaemia.

Speaking of his relationship with Cure Leukaemia, Geoff said, “I would not be here now without Cure Leukaemia and Professor Charlie Craddock, it is as simple as that. Beating blood cancer was my biggest ever challenge but in terms of sporting challenges this will go beyond anything I have ever taken on.”

“We have been training extremely hard and with just days until we start we feel as ready as we can be for what lies ahead. It would not be possible to take on this challenge without the incredibly generous support of Farr Vintners which will allow us to raise significant funds towards Cure Leukaemia’s £1 million Centre Appeal.”

Joining Geoff in the team are businessman Doug McKinnon, wealth manager James Maltin, chef Hayden Groves and chef and motivational speaker Marcus Leach. These are men with full-time jobs and families who are finding time to train for one of the toughest endurance challenges any person can take on.

The challenge has had no shortage of backing since it was launched at the London offices of JustGiving earlier this year. Hosted by Cure Leukaemia Patron Adrian Chiles it was attended by Geoff’s former Crystal Palace teammates Mark Bright and Alan Pardew, current Palace Chairman Steve Parish and cabinet minister George Freeman MP.

Another of Geoff’s former Crystal Palace teammates and the current England manager Gareth Southgate was keen to show his support: “As a former teammate of Geoff’s I know what a brave and committed player he was and these qualities will have no doubt helped him through his own battle with blood cancer. His fundraising since he beat the disease has not only raised millions but also inspired so many people in the process. I am in no doubt that Geoff and the team will complete this monumental cycling challenge and raise considerable funds towards Cure Leukaemia’s £1m Appeal so I hope the football community will unite behind this wonderful cause.”

The team has received messages of support from Olympic royalty in the form of Laura Kenny and Alastair Brownlee and West Bromwich Albion’s goalkeeper Ben Foster, who intends to join the team for the start of the Tour de France prior to the start of the Baggies’ pre-season plans, and from X Factor winner Sam Bailey.

Whilst these five are taking on all three Tours there are opportunities available for keen cyclists to ride the Tour de France with Geoff and the team. There are also sponsorship packages available for companies to get involved and potentially ride sections and stages of the famous routes. All the information can be found here