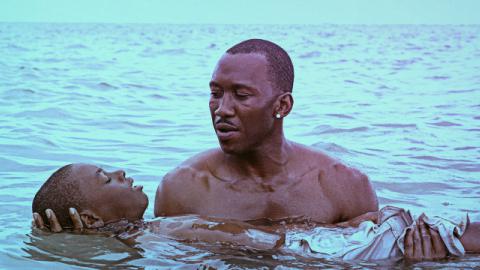 Richard Lutz explains why this movie about love and generosity is the natural choice for the best film award this Sunday.

The Oscar list for outstanding movie is headed by La La Land- a musical that is fun to watch only because you have a laugh viewing two big name stars try to sing and dance. Gene Kelly or Debbie Reynolds, they’re not.

The actual nominee that is the top pick for me is Moonlight. This is a tale of black America where Afro-Americans actors aren’t steered towards criminal nor comic roles, where they don’t play second fiddle to the big stars or are jammed into roles that are tailor made for non-whites.

This is a human and humane story set in a poor part of Miami that simply transcends race. It is about a vulnerable lonely boy called Chiron who is informally adopted by a Cuban crack dealer called Juan and is taught the simple pleasures of boyhood, of growing up and having someone who cares.

Director Barry Jenkins, who grew up in a black neighbourhood in Miami himself, create a three-part plot. There is Chiron as little boy; Chiron as a stumbling marginalised bullied teenager without his caring mentor Juan; and Chiron, as an adult, now called Black, who has modelled himself on his dead father figure and himself become a hardened drug dealer.

Clearly this is a plot that could have dwelled on the street element. But Jenkins climbs above it masterfully and tenderly showing how a young boy can learn to trust; how a street dealer can create time to help a child smile and, ultimately, how the heart reigns when it comes to the essential need for love and companionship.

Moonlight’s cinematography is akin to American virtuouso Terrence Malick who directed dreamy gems as Badlands, The New World and Days of Heaven. Like him, Jenkins isn’t afraid to let a camera dwell on an image- the rippling of a light blue ocean, a night sky over a beach or, more gritty, the desolation of a ghetto street.

London actress Naomie Harris (left) plays the mother of the boy as she isolates herself through crack addiction. And Mahershala Ali (Game of Thrones/House of Cards)  is the Cuban dealer who has the richness of heart to rise above his criminality to help a lost child.

Moonlight is head and shoulders above all the other choices – especially the cute but shallow La La Land. And it is right up there in the pantheon of black American films with those of Spike Lee or the shocking but forgotten Killer of Sheep by Charles Burnett about dire poverty in black LA.

As for the others on the best film list, number two for me would be Hell or High Water. It’s a great Texan noir tale with  Jeff Bridges as an old sick desert cop chasing two naughty but complicated  brothers. The plot is lean and mean and Bridges has got a firm grip on the wise old laconic good/bad guy with previous recent similar roles as Rooster Cogburn in True Grit and as a broken down C&W singer in Crazy Heart.

Other nominees include Fences with Denzil Washington based on a Pulitzer prize play by August Wilson, Arrival, Hacksaw Ridge, Hidden Figures, Lion and, also, Manchester by the Sea. All sturdy movies. But not in the same artistic league as Moonlight.

5 thoughts on “The Oscars: Moonlight best but will it win?”