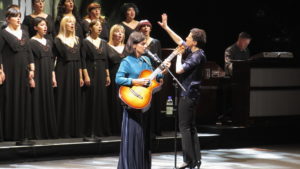 With Britain turning to the Danish concept of hygge (or ‘cosiness’) as the winter nights grow colder, Katie Melua’s music has become as much of an essential ingredient as candlelight and a warm blanket.

At Symphony Hall, the singer and guitarist provided relief from the hustle and bustle of Birmingham’s German Market with soothing Christmas songs inspired by her homeland of Georgia.

The 32-year old was joined on stage by the 23-strong Gori Women’s Choir conducted by Teona Tsiramua and they sang all ten songs from her new In Winter album. Opening with the Eastern European carol The Little Swallow and continuing with covers such as Joni Mitchell’s River and a choral work based on the Nunc Dimittis from Rachmaninov’s All Night Vigil, Katie’s new foray into classical crossover territory was mellifluously pleasing.

It didn’t matter that she sang If You Are So Beautiful in her mother tongue – it brought a shout from the audience in Georgian which she translated as “I love you”– because she and the superbly polyphonic choir created a hauntingly dreamy evening that had the mainly mature audience enraptured.

Katie spoke of how listening to a 2014 recording of the choir (“which still practices three times a week since 1970”) sparked a nostalgic return to Georgia last winter to record an album with them in a pop-up studio in the small town of Gori. Recounting her early life in Georgia, she introduced one of her own compositions Plane Song with the words “It comes from when I used to play with my brother on an old Soviet aircraft in a Georgian field”.

The safe, pleasant middle-of-the-road offering continued after the interval with Katie on acoustic guitar performing covers of Simon & Garfunkel’s Bridge over Troubled Water and Black’s Wonderful Life in a trio with Tim Harries on bass guitarist and Mark Edwards on keyboards.

The biggest cheers were reserved for when the choir returned to accompany Katie in Nine Million Bicycles and The Closest Thing to Crazy, old hits for any cold evening in which you feel like getting cosy.