Stereolab’s Tim Gane is now fully-throbbing inside his Anti-Matter Cavern. Martin Longley lowers himself into the pulse-field. 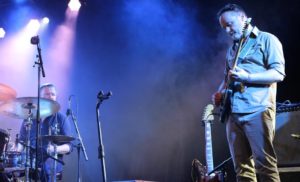 Following the possibly not permanent 2011 dissolution of Stereolab, guitarist Tim Gane has been recording and gigging with his Cavern Of Anti-Matter since 2013, focusing his old band’s concerns into a narrower tunnel.

Stripping away the exotica and pop influences, he’s retained a much tougher allegiance to the Krautrock elements of Stereolab’s sound (Faust, Can, Neu!), repetitive beats are refined, synthesisers ruptured, and guitar lines doggedly riffed. The current material is now all-instrumental, and usually of an extended length, all the better to accumulate intense rhythmic and texturing mass.

Gane is helped along in this mission by Holger Zapf (analogue synth-banks) and Joe Dilworth (old Stereolab sticksman). Zapf tends to be a subliminal presence physically, obscured behind his racks of gear, but his sonics are no mere meek presence, often providing dense, bassy pulses, as well as higher-end oscillations. Dilworth and Gane are the personalities of the combo, bantering consistently throughout the set, often at odds with the serious bent of the music.

At the recent Green Man festival, this band played for barely 45 minutes, but upstairs at the H&H, they run on for just over an hour, allowing even greater progressions of intensity. Gane might keep his riffs quite minimal, but like a systems musician, he covertly increases the content, sneaking in a filigree, twisting out a variation, upping the level of chug. Dilworth is constantly taut, powering with extreme force, making some numbers surprisingly danceable, like a radically alternative disco variant.

It’s this combination of rock, electronics, funkiness and abstraction that prevents any sense of monotony arising, as the audience allows itself to be carried aloft, on top of the slowly-shifting pulses.