Richard Lutz takes a pew at the Birmingham Rep to watch Maggie savaged by a dead sheep. 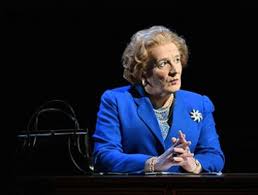 To put this play and its title in context: Labour heavyweight Denis Healey once hilariously called being attacked by Tory politician Geoffrey Howe akin to “being savaged by a dead sheep”.

Howe, Maggie’s right hand man, was indeed placid, quiet, monk-ish and he maybe deserved the quip from the sharp-tongued Healey as they sparred across the Commons back in the eighties. But this play is about when Howe turned from dead sheep to a wolf. When sidelined by an increasingly rigid out of touch  Thatcher more than a quarter of a century ago, he resigned from government and delivered a vicious attack on the flailing anti-Europe Prime Minister. She resigned soon after.

Ex BBC reporter Jonathan Maitland re-creates this episode, throwing in the delightful sub plot of Howe’s liberal wife Elspeth tangling with Maggie every time they met – like “two wasps in a jam jar” quips louche MP Alan Clark at one point. She comes across as half Lady MacBeth, half St Joan.

Paul Bradley pulls off the humbled figure of Howe to a tee – even when he wakens from his subservience to launch his fatal assault. Carol Royle is Elspeth Howe… assertive, in love with her cowed husband and still an enigma as to what part she actually played in perfecting the fatal verbal blow against the woman she detested.

As for the  Maggie herself, here’s a surprise. It’s taken on by Steve Nallon who voiced the Spitting Image Thatcher three decades ago. He/She comes across as a bit of caricature, the face rigid, humourless, the gait stiff and awkward, the voice perfectly pitched. But sometimes it is a panto dame in what is a fine dark comedy play coloured by superior acting.

A trio of actors valiantly portrays some of the main players from that era: the aforesaid Alan Clark, Neil Kinnock, Downing Street spokesman Bernard Ingham, Ian Gow, Nigel Lawson and even an hilarious impression of Brian Walden, the TV front man who never could pwonounce the full wange of the alphabet. Too bad, though, there was no Denis Thatcher (only an offstage voice) or the Tarzan-cum-elephant in the Tory room, a certain Michael Heseltine.

Dead Sheep is nicely twinned with a play about Enoch Powell later in the month-What Shadows is at The Rep from 27th October.