Birmingham is being used as a location once again by Hollywood. This time, by one of movieland’s best directors. Guess why? asks Richard Lutz.

The city’s media can’t get enough of it. Steven Spielberg is in town.

He’s shooting a movie, called Ready Player One, due out in 2018. Here he is being snapped in Twitterland on location. 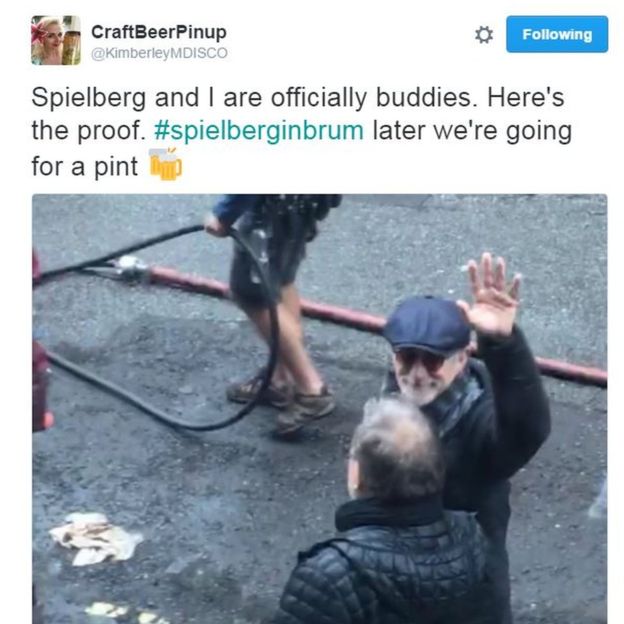 Spielberg has clout. So I take it he had no trouble signing up Brit actors such as Simon Pegg and Oscar winner Mark Rylance for the project, which is described as a dystopian sci-if thriller. He’s big time, top of the tree.

Even Birmingham’s commentators seem a bit awed by The Spielberg Factor. The filmmaker has chosen the “somewhat unlikely location’ of Birmingham”, says a BBC breathless online report. Shock exclusive, it seems to say, a film director is in Britain’s second largest city.

Actually, according to insiders, the city is a likely location, not an unlikely one. It seems Birmingham, according to one movie pro, has a “brutal aesthetic” which, I guess, is foo-foo talk for being a dump. Another pundit referred to its “muscular environment” which I originally thought meant it had a high number of all-night gyms. But that just means it’s got mean streets.

Another commentator was more plain speaking and understandable. It has “a run down look” with its forlorn Digbeth arches crapped out with graffiti, he explains. And, he adds, it’s cheaper to use than London.

Well, that’s the essence of it then.

The city is a great site to shoot films about urban crime, post-apocalyptic horror and dark dystopian thrillers. Or even stuff about urban dystopian horror or post-apocalyptic crime. Or just moody downbeat thrillers filled with rain-slashed cruddy streets. And you can chop back your budget by coming to the West Midlands rather than shooting in expensive London with its clogged up traffic and exorbitant fees.

So, no romcom in old Brum; no high finance caper with catwalk stars; no storyline about a group of earnest twenty-somethings sitting around a swish eaterie for 36 hours wondering about relationships, love, hate, symbiosis.

So, how about re-marketing this city’s brand? We can call it Birmingun, with its inner suburbs of Horrorborne or Spookbrook, Cheswick Grim or Northfiend, with its nearby towns of Werewolfhampton or Worcestershire’s very own Killerminster, or down by the Avon, with the pretty town of Evilsham?

And then there’s Headless Cross and, of course, how can we ignore the original Hollywood on the back road to Redditch?

But what do you really expect anyway, despite the city employing 220,000 workers in the financial/professional sector and annually bringing in £15 billion to the urban area? Birmingham is simply seen by many as a trash can (sorry, muscular and brutal), though maybe not the kind that the film world really wants.

** There may be light at the end of this grim tunnel.  This week begins the Flatpack film festival in Birmingham. It’s on for a month and shows movies made locally including an examination of how the city is portrayed  on celluloid