Nimrod tours are ready for half term take-off. 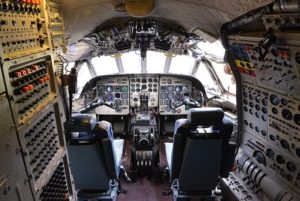 As May half term fast approaches, organisers at the Royal Air Force Museum Cosford are gearing up for a busy week of family tours on-board one of the RAF’s most sophisticated aircraft. From Saturday 28th May until Sunday 5th June, families can step inside the Hawker Siddeley Nimrod R.1 XV249 and learn about its intelligence gathering role in the Royal Air Force.

Tours will run throughout the day for groups of up to six people, lasting approximately 15 minutes. During the tour visitors will learn about the history of the aircraft, hear about the crews on board and view the sophisticated surveillance equipment up close. Perfect for any budding aviators, there will be plenty of opportunities for photos and tour guides will be on hand to answer any questions the inquisitive youngsters may have.

Families will discover why this aircraft and its missions were so secret that even the existence of 51 Squadron who operated it wasn’t mentioned in official documents until 1992, after the end of the Cold War. They will learn why the aircraft’s capabilities were such that even flying through friendly and allied nation airspace required diplomatic clearance.

Mixed with a few light hearted stories of the crew stationed on board the Nimrod, including tales of the giant tea pot that could brew almost a gallon of tea, these fascinating tours led by museum staff will have visitors wondering what really goes on in the skies above us. Eagle eyed youngsters are challenged to see if they can find the Argos controls? This equipment was so secret that there was never any mention as to what it was or what it did even in the restricted crew manuals.

RAF Museum Cosford Events Manager Abi Betteridge said: “Nimrod tours have proved popular with aviation fans in the past, but there is also a real demand from families and our younger visitors who are eager to get on-board and find out more – for some children, this is the first time they have stepped inside an aircraft and what a fascinating one it is! We are able to tailor the tours depending on our audience so the youngsters visiting us during half term will learn lots about the aircraft’s capabilities as well as quirky stories about what it was like to work on board the Nimrod, keeping it fun and not too overwhelming.”

The Nimrod flew in both the maritime patrol and electronic intelligence gathering role. Maritime surveillance, anti-submarine operations and intelligence gathering have been key tasks for the Royal Air Force for much of its long history. When the Nimrod was finally retired from service in 2011, the type had operated with distinction for over forty years in all these roles, and more.

Nimrod tours are available daily throughout May half term week from 10am-4pm and tickets cost £5.00 per person. Organisers are advising any interested visitors to pre-book their time-slot now via the museum’s website www.rafmuseum.org/cosford to avoid disappointment. Tickets can be purchased on the day subject to availability. All children must be accompanied by an adult, tours are not recommended for children under the age of five. For further information please call the museum on 01902 376200. The museum is open daily from 10am to 5pm and entry to the museum is free.