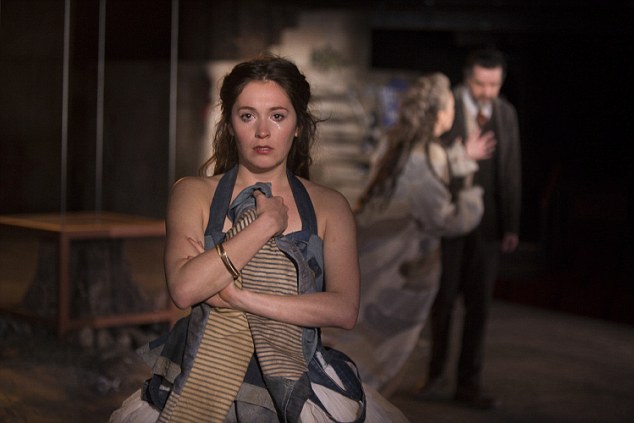 Cymbeline isn’t one of Shakespeare’s greats. It was written late in his career and perhaps it’s fitting on this, the 400th anniversary of his death, that the Royal Shakespeare Company should give it a re-fit.

Director Melly Still seems to throw everything, including the kitchen sink, at us in her Stratford production. And the result is a mish mash..too much…so much so that the already difficult plot is well and truly smothered.

She sets this play about an ancient king and his estranged daughter in a sort of Mad Max dystopic future, a cluttered world where rags, punky hair, medieval cloaks, modern army uniforms  and even a touch of soul music are the order of the day.

British ruler Cymbeline must pay tribute to the Roman armies which wait like the Evil Empire in northern Gaul to invade. Against this backdrop, the ruler’s daughter Innogen is repulsed by the royal family because she has married a lowborn. She runs away into the depths of Wales to seek her exiled husband and learns the roughewn but honest ways of mountain folk (who have a regal surprise up their sleeves).

In a thumbnail, that’s the plot.  Though Shakespeare does pile it on with sub-themes such as  the stubborn pride of an island race seeking to keep its nationhood  to give it historic context.

And this is where this production in Stratford really runs into trouble.

With Ms Still portraying this early British world in a crumbling modern mess, the story gets lost – even more lost when she grabs hold of  allusions to Albion’s ‘in-or-out’ relations with the Continent to make a point about the coming EU vote..  “Our Britain seems as of it, but not in’t,” says one.

And to top it off, she does a bit of gender switching with good King Cymbeline transformed into a queen and supporting roles switching sex as well. This buries a late Shakespearean theme of the conflicts between fathers and daughters also portrayed  in The Tempest, Pericles and The Winter’s Tale.

All this in a play screaming for clarity. The plot is contorted enough as it is. And despite imaginative acting from Bethan Cullinane as a sparky Innogen, Marcus Griffiths as cloddish Cloten and Gillian Bevan as a strong armed Queen (sic) Cymbeline, it is a difficult production to get a grip of.

So, too tricksy by half with a play that itself is a difficult one to grasp.