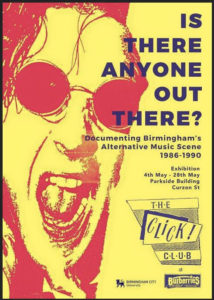 Is There Anyone Out There? is a curated collection of original photographs, film footage, audio recordings, flyposters, contracts, riders and eyewitness accounts charting the history of legendary Birmingham music haunt The Click Club, marking 30 years since it opened.

The exhibition, presented by Birmingham Centre for Media and Cultural Research, draws upon the personal archive of established music promoter and photographer Dave Travis, and showcases some of the thousands of photographs taken at the club which ran between 1986 and 1990.

Influential Birmingham indie band Mighty Mighty, whose 1986 hit single Is There Anyone Out There? lends itself to the exhibition, will give a short performance at a private launch on Tuesday 4 May.

Established in 1986 by Dave Travis and Steve Coxon, The Click Club was the name of a concert venue and disco associated with Birmingham’s alternative music culture. Located at the nightclub Burberries on the Street, on a pre-regeneration era Broad Street, capacity was limited to a few hundred attendees on any one night.

Travis said, “Steve Coxon and I started The Click Club out of frustration at having to travel all over the Midlands to see the bands that we liked or that we were reviewing for the music press. We thought that it would be an ideal situation if we stayed where we were and the bands came to us. Birmingham was very different in the 1980s; most of the clubs stipulated a smart dress policy and as a result the nights I and my friends could go to were limited. The Click Club operated a no smart dress policy although it was always more of an attitude restriction.”

During its lifetime, the club showcased a wide variety of acts reflecting the varied culture of the independent and alternative music such as Primal Scream, We’ve Got a Fuzzbox and We’re Gonna Use It, and The Mighty Lemon Drops.

The club supported the emergence of other local bands such as The Wonder Stuff, Ocean Colour Scene and a group of grebo acts from the Black Country including Pop Will Eat Itself and Ned’s Atomic Dustbin.

Under the management of Travis and Coxon, The Click Club booked and promoted live shows by gothic rock bands like Balaam and the Angel, Fields of The Nephilim and Rose of Avalanche, as well as nurturing the so-called baggy scene with appearances from The Charlatans, James and Blur.

The Click Club played an important role locally, nationally and internationally, as part of a touring circuit, and for distributors and retailers of independent music. As a central feature in a music scene operating on a DIY-basis, independent of the major labels, at the intersection of subcultures, it also had enormous cultural value for its participants.

The heterogeneous nature of the independent scene and a liberal approach to booking was further underlined by performances from hardcore punk bands like The Stupids, ‘acid jazz’ act James Taylor Quartet and renowned DJ Fatboy Slim, as well as Zimbabwean music from The Bhundu Boys, who hold the record for the venue’s best attended gig.

Using contributions from those who attended the nights along with loaned artefacts, Is There Anyone Out There? highlights The Click Club as an important part of Birmingham’s music and cultural heritage.

Professor Paul Long of BCMCR, said, “The title of the exhibition comes from 1986 single Is there anyone out there from local band Mighty Mighty. The lovelorn lyric evokes the romantic angst of youth but also poses a question for the curators of this exhibition: who is out there who might know about the Click Club and is anyone else interested in this subject?”

“We are interested in finding out how people engage with the exhibition and welcome feedback from from those who were part of this community as well the wider public of Birmingham and beyond. We want to know: what is the value of this material? What does it tell us beyond confirming the memories of the few individuals it concerned, and does such material have wider importance and contributions to make for our understanding of the past?”

Is There Anyone Out There? is presented by Birmingham Centre for Media and Cultural Research in association with Birmingham City University and Dave Travis.

The exhibition runs from Wednesday 4th May to Friday 27th May at Birmingham City University’s Parkside Gallery. Admission is free.