Richard Lutz watches a memorable and frenetic staging of the Marlowe classic at The Swan in Stratford. 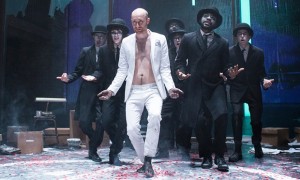 We all have a price. Faust had one when he sold his soul to the devil.

Christopher Marlowe’s play, so vivid in language, so accessible more than four centuries later, feeds off this hellish deal.

Director Maria Aberg plonks it in the modern era – a stripped down, creepy modern era tinged with a diabolical dreamworld. Both Faustus and Mephistophilis are in white suits while the panoply of underworld apparitions in black could be from the cast list of A Clockwork Orange (see above).

Black and white merge, good and evil combine and it is soon apparent we are talking about Faust and the devil being one in the same, two parts of a whole. It is not by accident that the director has the two main actors switch roles during this long six month run.

It makes for hard nosed frantic viewing, produced without an interval in less than two hours. After all, maybe you don’t need that much time to get across how Faust, so eager to embrace the temporal world at his own eternal cost, is just a model for all of us as we engineer our own compromises during our brief time on this planet.

Berg does offer a trick or two that don’t work. Actors Sandy Grierson and Oliver Ryan play a game with matches at the opening to decide who plays which of the two main roles on the night. Grierson won the Faustus role but it was only clear when I walked out what that was about – it was too tricksy by half.

And she goes way out on a limb with the scene when Helen of Troy is summoned up. Mephistophilis, rather than Faust, says the memorable line “Is this the face that launched a thousand ships…?”

The problem is that this Helen is not a woman but a child. Was Mephistophilis just being deeply ironic when alluding to a small girl as the most beautiful woman in history?  Eventually, Faust embraces, dances, is aroused by this prepubescent apparition and it is an uncomfortable vignette that simplydoesn’t ring true.

That said, Grierson delivers a fine performance. He is on stage for the whole production, a marathon performance as a haunted, doomed Faustus who knows his pact will send him to hell but is still unsure of the deal. Ryan plays Mephistophilis as a playful spirit from hell who wickedly knows it is just a matter of time before he can send his earthly victim, his other half, to eternal damnation.