Alan Clawley reflects on how recent architecture can be saved.

How do we as a society decide what things from our past should be kept and what thrown away? As individuals we may feel entitled to make our own private decisions in the belief that no one else is involved. But who decides what to do with something that is owned by the state or which is part of our collective history regardless of who owns it or how much it is admired? In a democratic society how should we confer official ‘heritage’ status and determine what will be conserved for future generations? And should the process apply regardless of how many of us like or dislike the thing in question?

The system we have at present is a muddle. In theory the task has been given to a body of experts – English Heritage – now named Historic England. Their professional staff have made a study of such things and are expected to know what they are talking about. It’s fashionable these days to discredit such experts, as the Birmingham Post did when it reported that English Heritage’s recommendation that the Central Library be listed was “just an opinion” and no better or worse than its editor’s opinion or that of the council leader.

Perhaps the internet encourages us to believe that we can know everything there is to know without the intercession of special people. We are of course entitled to be sceptical about gurus, spin doctors, high priests and TV pundits, but when our duly elected representatives have decreed that these matters will be considered by their chosen experts we can hardly disagree with their findings on purely personal grounds.

The problem is that, having asked for its advice, our elected representatives can accept or reject it; presumably on political or other grounds. We do not know what their reasons are. The advice given to them by civil servants in the Department of Culture Media and Sport is confidential. MPs and councillors are of course expected to listen to the views of their constituents and it is natural that they will tend to make decisions that will enhance their prospects of re-election. However, it seems perverse of ministers not to want to explain their decisions to the voting public.

Ministers are particularly constrained in their public utterances. All they have to say in public is that “the requirements have not been met”. If they go any further, as Margaret Hodge did on the Ed Doolan Show, they risk their decision being challenged and possibly quashed, as in this case it was, only to be re-made properly by the next minister.

The muddle can easily be resolved by giving Historic England the sole power to make the decision, like it or not. This change was proposed but not implemented when Historic England was created in 2015. There is no point in having a body of experts if its recommendations can be rejected at will without public justification. That leaves the system open to corruption. But if the matter were entirely a political one the minister would be subject to even more intensive secret lobbying than is known to exist with the present system. Decisions could be made on an arbitrary basis, such as whether the minister liked a particular building or architectural style, or whether it would cost too much to maintain, or that it stood in the way of what Margaret Hodge referred to as a “stunning new development”.

It could be argued that political choices are more democratic than those made by un-elected experts, but there is no established means of knowing whether such decisions are supported by a majority of electors. Opinion polls can be designed to give the desired result. Referenda are only used for constitutional issues. Online petitions only reflect the views of people who are habitually online. Even mass demonstrations can be dismissed by government as the expression of a vocal minority. Single-issue pressure groups are regarded as irresponsible.

Even if it were possible to prove that a simple majority were in favour of a particular measure, the final decision, for or against, could be taken by Parliament, Cabinet or a single Minister. In this way HS2, nuclear power stations and going to war were decided without the settled view of the public really being known or put to the test in a General Election.

There are dangers in both approaches. The views of experts and elected representatives should be open to rational challenge and subject to modification. But if we do not have a legitimate channel for doing it that is open to all – conservationists, politicians, property developers, councillors, citizens – the weaker of them are cut out of the process.

What have I learnt from my 13 year-long efforts to save the Library? The citizens of Birmingham were evenly split on the issue; many were nostalgic for its predecessor; those most likely to oppose its demolition tended to be thoughtful or artistic. In deciding not to list it the various Ministers for Culture erred on the side of business and ‘progress’; their civil servants colluded by zealously guarding their decisions. Prince Charles believed he had a divine right to speak his mind; the media cravenly connived with him.

Most Birmingham councillors cared little about the Library or even the city centre; members of Cabinet, Planning and Scrutiny Committees meekly followed their Leader. The minds of Albert Bore, Gary Taylor and Argent plc were made up years ago and weren’t going to change. The Council’s Conservation Officer was too weak to fight his corner. Mike Whitby was very canny with money and forced the project through by sheer bravado. John Clancy could have intervened but didn’t. The Birmingham Post loyally regurgitated the negative propaganda supplied by the Council and its business allies whilst printing letters and articles from the occasional protestor.

The Birmingham Press and its predecessor, The Stirrer, provided protestors with a valuable alternative to the mainstream media who dismissed us as “irresponsible”, a “vociferous minority”. Regional TV reporting was lazy and dominated by human interest stories. The campaign’s most powerful allies – English Heritage – now Historic England – and The Twentieth Century Society did their best against the powerful forces ranged against them.

Who, from this list of actors, can we look to in future to stand up for hard-to-love twentieth century architecture in Birmingham? Who will carry sufficient weight to counteract the power and influence of the private property industry? Who will sing the praises of brutalism and concrete? Who will champion our disappearing modernist ‘heritage’ inside government? The answers are far from clear but there are some glimmers of hope.

A brilliant new book by Christopher Beanland, CONCRETE CONCEPT celebrates brutalism and will be published and reviewed here next month. 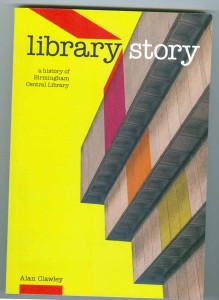 My own account of the campaign – Library Story – has already been published. A copy is to be presented to the new Library at 1 o’clock on Monday 11th January when signed copies will be available. The rest is up to us.

2 thoughts on “A future for the past”