In the weeks before Christmas, chocolate producers work flat out to meet delivery deadlines. But for Sheilagh Matheson, packing chocolates means life has come full circle. 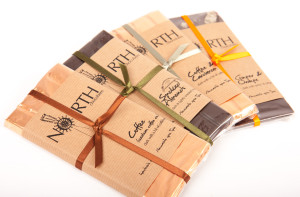 Black Magic, Matchmakers and public humiliation over a chocolate nougat. It’s the summer of more than 45 years ago. I’ve just left school and my holiday job is packing chocolates at Rowntree Mackintosh’s factory.

Every morning I inhale the cloying smell of the stuff as I clock on and take my seat at the Black Magic production line. I’d left it too late to find a soft job in offices or shops like my friends, except for Ann Mitchell, a glamorous Mod who didn’t need work because she kept winning watches and fivers in beauty competitions.

While she sashayed down catwalks in a white bikini, I was in my hairnet and overalls, dropping chocolates into a stream of plastic trays that sailed past me on a conveyor belt. I was so quick I could pick up three between my fingers in each hand, fit them into the right spaces and pop a Montelimar nougat into my mouth without breaking rhythm.

Have you heard that workers in sweet factories can eat as much as they like because they’re soon sick of the sight of them? That wasn’t true at Rowntrees. So when a hawk-eyed chargehand accused me of eating a chocolate, I shook my head in denial. “I know you’re eating,” she insisted. “Open your mouth.” She went ballistic when she saw the gooey mess and I was mortified at being banished to the Matchmaker line.

This was an age of piece rates, sexual inequality and wage discrimination.

The regular workers disliked students. We wanted loads of money as quickly as possible so we worked hard and fast and never said no to overtime. But that distorted the production levels and piece rates and made life more difficult for them. They continually cornered us and warned menacingly to slow down…or else.

Nearly all my workmates were women and unequal pay was the norm. The few men around were paid much more than us, presumably for their highly technical skills pushing a brush around or occasionally wielding a spanner.

The women wreaked revenge with lewd speculation whenever a man strayed by. I can still picture two young guys quivering on the brink of tears as middle-aged mums shrieking with laughter bombarded them with raucous abuse. They were victims of daily verbal sexual harassment.

But they found comfort in their fatter pay packets.

Everything was timed, from clocking on (an hour’s pay deducted from latecomers) until the ten minute tea break, followed by a toilet break, then a stream of Tom Jones hits blaring out across the factory floor. It was torture for a Hendrix fan like me.

After ten weeks, I realised it was time to leave Rowntrees when I found myself humming along to Delilah and It’s Not Unusual. I swallowed my last surreptitious Montelimar, threw away my hairnet and clocked off from the world of chocolate manufacture for ever.

Or so I thought.

More than four decades later, I noticed increasingly exotic chocolate on supermarket shelves and did a chocolatier’s course, intending to become the Jo Malone of the chocolate world. It was a short-lived ambition because my individual chocs tasted no better than the very expensive chocolate I had bought to make them.

But more enterprising people have built flourishing artisan businesses. Bev Stephenson set up North Chocolates three years ago. She has won a raft of prizes. She makes around 200 bars daily, in 20 different varieties. When she needed a casual worker to help with the Christmas rush I was curious and applied for the job.

It was a world away from Rowntree Mackintosh and 21st century automated mass production. Bet runs her business from her home. There’s no clocking on, no conveyor belt, no timed tea breaks and no sexual harassment or Tom Jones. I can even listen to Radio 4.

For Christmas, she’s making thousands and thousands of bars of chocolate, including Mulled Spice and Stollen. She also has a novelty range. Reindeer Poo and Rudolph Noses are massive sellers.

Everything is handmade with ingredients no one dreamed of adding to chocolate in the ‘60s, like cardamom, chilli, or geranium. While Bev stirs, checks temperatures and pours a lake of melted chocolate into moulds, her mother Althea, the only other employee, shows me what to do.

I expected it to be easier than at Rowntrees. But it was harder. It’s fiddly work smoothing foil round a bar of chocolate, sellotaping it into an envelope, sticking the wrapper down and finally tying a tiny bow. I suppose all that packaging gives a chocoholic delayed gratification but all it gave me was backache, aching legs and fingertips snagged raw on the tape dispenser. Worst of all, I was painfully slow. What happened to my nimble teenage fingers?

But despite my embarrassment, and even after hours of wrapping, I still find every bar incredibly tempting because Bev has chosen clever designs and fabulous colours.

At this time of year, she works every waking hour. Her order book is, well, choc-a-block. When she isn’t making it, she’s selling it online or at Christmas Fairs and Farmers Markets, supplying shops from small retailers, to big department stores, to the National Trust. She has deliveries, orders, accounts, stocks and social media to deal with, never mind a fumble-fingered amateur blethering on about life at Rowntrees in the Dark Ages when life was black and white..

Edging my way round a packed Christmas Fair, I realise Bev is one of a small army of artisan businesses whose home crafted products help to make Christmas special. So as you unwrap your bar of Smoked Almond chocolate and your mouth starts watering…pause…and raise a glass of Snowball to toast the unsung heroes who have worked so hard creating all those delicious treats for us.

In case you’re wondering, I never got sick of Bev’s chocolate because I didn’t eat any. Cramming a 100 gramme bar into my mouth is much harder than a Montelimar.