Road users urged to think safety as nights draw in.

As the nights continue to draw in, Birmingham’s road users are being urged to think safety after new figures showed October is the worst month for serious incidents. 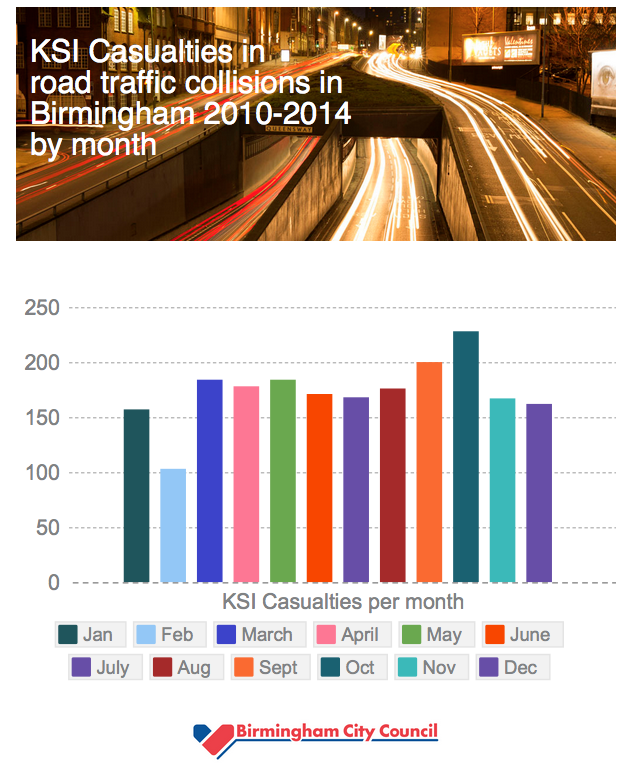 Notably on a month-by-month basis, there was a 27 per cent drop in November – the month immediately following the point at which clocks are put back an hour.

The figures have prompted reminders to all road users to ensure they wear clothing that makes them as visible as possible and consider their pedestrian routes if out and about in the evening, ensuring they use routes well-lit by street lights and cross at safe and well-lit places.

Cllr Shafique Shah, Cabinet Member for Inclusion and Community Safety at Birmingham City Council, said: “On a long-term basis, we are seeing fewer incidents on our roads, but we are not complacent and remain fully committed to improving highway safety. Figures like these show this time of year is the most dangerous, so I would urge anyone taking to the roads to think about the conditions of the highway, light levels and others using the highway.

“There are a few simple things that anyone can do to make themselves safer – and I would encourage everyone to be careful when out and about at this time of year. Remember fluorescent by day reflective by night. This data is also helping inform our emerging Road Safety Strategy, and we will continue to monitor all available information to highlight trends and put in any measures that may help.”

To light the way for secondary school children who are riding their bikes to school during the winter months, the council’s Road Safety Team will be giving out sets of bike lights to raise the importance of being seen while cycling on the road.

And A Biggest Brightest Selfie competition for schools is being run to remind schoolchildren to keep themselves safe as well as a chance for their school to win a scooter pod storage facility for their scooters.

Anyone wanting further information about keeping safe on the roads or how their local school can take part in the competition should contact the council’s Road Safety Education Team at roadsafetyteam@birmingham.gov.uk