Sir Howard Elston, our sports editor, sits down with the beleaguered chief FIFA honcho as he faces a 90 day suspension over lurid totally false allegations that he is a cheating lying self-deluding thief.

Sir Howard Elston (DOA): Septic, old bean, haven’t seen you since we had a chin-wag down at the club. More ice in that gin?

Septic Bladder: Bit of a rush, H…what with meeting with Swiss lawyers, the FBI, CIA, Mossad, the KGB, MI6, the Taliban, Columbian drug lords and the Qatari royal family…but sure, top it up.

SHE: First, are you innocent of claims you mishandled hundreds of millions in dubious deals and were president of the World Cup of Fraud?

SB: I am shocked you used that phrase. Apologise now.

SHE: Actually it was the FBI that said it in its 164 page indictment of your activities, of which I know you are totally innocent. You..are..innocent, aintcha?

SB>: Yes, and let me make it clear how I helped millions improve their lives through football. Especially Jack Warner who used to be a highly valued FIFA official until indicted and Uefa prez Michel Platini who received a meagre £1.3 million inducement not to  run against me, which is, by the way, not a bribe.

SHE: But the sponsers such as McDonalds, Budweiser, Visa and Coca Cola want you to go. Will that influence you? 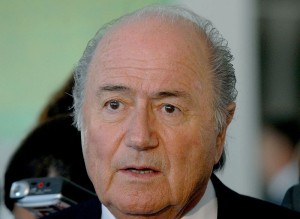 SB: I am bigger than mere commercial interests. Pass the ketchup please and I’ll have another Bud Lite.

SHE: What’s your next step after suspension and a quick trip to your secret bank vault in the Caymans and a trial and a 26 year jail term?

SB: I am working with Donald Trump, who I am recommending to succeed me as FIFA dictator following my 17 years as the democratically elected president of FIFA.

SHE: And if he’s too busy being a bumptious cretin?

SB: I extend the succession to the board of VW with whom I have worked for decades providing fleet cars for every football boss in the world because it is such a top class ecological company.

SHE: Fwarhr and heck Lord Septic, what a scoop. And thanks very much. My boss at thebirminghnampress.com internet cyberspace website will love that story.

SB: A pleasure. I will invoice you in the usual way. Payment in small denominations please. Care for another cheeseburger, or a McNugget?