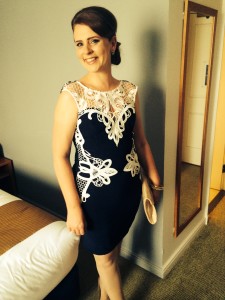 Katie Washbourne, 28, a homicide case worker from Tile Cross in Birmingham, has been announced as one of the six finalists for UK Worker of the Year 2015.

Katie, along with performing her day-to-day duties as a homicide case worker, also works alongside the police for the Victim Support charity, which deal with initial stages of murder cases and helping families to cope. Katie prides herself on putting others first, and providing the right emotional support for victims in the UK.

Judging day now awaits Katie on the 16th October, where she will bid to become the sixth UK Worker of the Year winner, a competition set up by workwear company Dickies. Katie has been asked to attend the final MCE British Superbike meeting at Brands Hatch, where the Birmingham-based homicide worker will be questioned by a panel of judges, much similar to a Dragon’s Den scenario. Katie will be asked a series of questions, giving him the ultimate chance to stake her claim for the title of UK Worker of the Year 2015.

A delighted Katie commented: “I’m ecstatic to be chosen as a finalist this year. I have a passion for the work I do and the care I provide, whether it be volunteering, studying or caring for my family. I don’t feel like I work any harder than anyone else in my team, as they are all fantastic. I get a lot out of what I do and being recognised for it is fantastic.”

Maurice Morton, sales and marketing director at Dickies, said: “The standard of entries has increased and has been noticeably stronger than in previous years. We received the highest number of entries this year and Katie and our other five finalists have been picked on merit to battle it out for this year’s prestigious title. It was obviously no small task to sift our way through the thousands of nominations we received but Katie’s entry has got him to judging day and our grand finale.”

The winner of the UK Worker of the Year 2015 competition will have the luxurious choice between a Kawasaki Ninja 300 and a £5,000 holiday. This year, the winner who will be presented their prize at Brands Hatch on the 17th October, will receive a year’s free shopping at ASDA to go along with their other choice of prize. Katie will also be in the running to win a life-changing £100,000, should she predict the outcome of the top six rider positions in the weekend’s MCE British Superbike race.

Similar to last year, the other finalists represent a wide range of professions and a wide geographical spread. They are: John Walsh – a gymnastics coach and builder from Bolton; Harry Timms – a tree surgeon from Andover; Paul Middleton – a railway engineer from Saltburn by the Sea; Rebecca Rowlands – a builder from Chapel-en-le-Frith and Lisa Morgan – a motor vehicle lecturer from Liverpool.