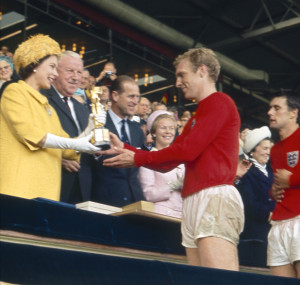 From Sir Howard Elston, at pitchside as the monarch passes Bobby Charlton’s record.

With a Wembley crowd of 76,000 roaring fans behind her, she nailed it in the back of the net from the spot.

Later, still in her number 7 jersey after playing in her 107th game for the country, she commented: “What a night. First I become the nation’s longest reigning sovereign. And then I help my team with my fiftieth.”

She went on: “I always had Bobby Charlton in my mind and….”

(note from the editor: Have we mixed up two stories here? This copy needs Chex before putting it online)