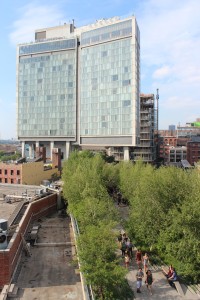 New York City may be in a league of its own for skyline views but a beautiful green space thirty feet above the ground provides an equally satisfying perspective.

Step on to the High Line on Manhattan’s Lower West Side and you float over the busy streets in a way that gives new meaning to the concept of an urban park. This former elevated freight rail line offers a leisurely 1.5-mile-long stroll alongside 19th century factories and 21st century condominiums, with botanical gardens, art installations and breathtaking vantage points dotted along its winding route.

The public walkway, which was completed last year, has been welcoming more than four million visitors a year, making it one of the Big Apple’s biggest attractions.
That’s good news for Birmingham which may get a mini-high line of its own after the City Council adopted the Curzon Street HS2 Masterplan this summer, which includes plans for a ‘superpark’ on the Duddeston viaduct.

New York’s high line has proved to be an even bigger draw than local artists and designers first imagined when, in 1999, they formed the Friends of the High Line, the community group that maintains and operates the park. They persuaded the City of New York to save the crumbling relic, whose final train rolled down the line in 1980, from being demolished and turn it to public use.

The park was developed from 2009 in three phases beginning with the Meat Packing District, then West Chelsea, and finally Hudson Yards last September. During that time new housing, office and retail developments have sprung up around the line, turning the old industrial areas into a thriving residential and commercial neighbourhood.

A 20-minute walk from New York’s Penn Station takes you to the northern entrance of the High Line at 34th Street and 12th Avenue, the only point where the park descends to street level. A simple bonded aggregate path gives you the best view of what the disused line was like before its redevelopment, with a fenced-off section overgrown with wildflowers running alongside it.

As you follow a loop there are expansive views to the west of the Hudson River – and to the east of the Empire State and Chrysler Buildings. The new multi-billion- dollar Hudson Yards mixed-use development rises up around old rail yards below. Maintain a casual stop-start pace and you will cover the park in about an hour. The route is made easier with chairs and benches among the perennials, shrubs and trees, and the nine sets of stairs and four lifts that provide regular exit points. You can see the line’s original framework of steel beams and girders in a stripped- away section at 11th Avenue, the sunken areas of which have been coated with silicon to provide a play area for children. 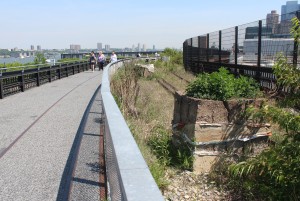 As you pass between huge former storage warehouses at 25th Street, a flyover takes you through a grove of bigleaf magnolia, sassafras and serviceberry trees.

The greenery becomes denser as you step through a two-block thicket of lush dogwoods, bottlebrush buckeye, hollies and roses. The architecture gets more iconic too, with examples such as Frank Gehry’s twisted IAC Building at 18th Street, Jean Nouvel’s pixelated 100 11th Avenue and Shigeru Nan’s Metal Shutter Building between 10th and 11th Streets all vying for attention.

At 17th Street you can sit in a glassed-in amphitheatre-like space and watch the traffic head up 10th Avenue to the north underneath you. It’s the perfect place to contemplate lunch, which you can take at a wide choice of food stalls and an outdoor café between 15th and 16th Streets.

But it’s worth leaving the line at this stage to explore Chelsea Market. Housed in the former Nabisco factory where the Oreo cookie was invented, the vast complex is a beguiling mix of food and retail distractions. Head to The Lobster Place, a New York institution since its launch in 1974, and order a deliciously fresh lobster roll with trimmings – as I did – from its fast-food Cull & Pistol Galley for $16.95 (about £11).

Back on the line, you can relax or dip your toes – in warmer weather – at a sundeck and water feature between 14th and 15th Streets before heading underneath the trendy Standard Hotel and arriving at the Tiffany & Co Foundation Overlook. This balcony at Gansevoort Street in the Meatpacking District marks the southernmost tip of the High Line, with the remainder of the rail line having been demolished in the 1990s.

Bidding farewell to the park by the main stairs, it’s a mere five-minute walk westward to the new Whitney Museum, which opened in May this year. Designed by Pritzker Prize-winner Renzo Piano, the stunning £285 million museum is currently exhibiting more than 600 pieces from its unparalleled collection of 20th and 21st century American art under the title of America is Hard to See.

Local restaurants are certainly not hard to find. For one of the best, retrace your steps to the High Line where you will find an exhibit in itself nestled directly underneath the southern entrance. Enclosed in a glass box designed by Renzo Piano while he was taking a break from the Whitney, and billed as coastal Italian, Santina appears almost like a mirage with real palm and orange trees and waiters dressed like deckhands on a yacht. The whole-grilled porgy, priced at $27 (£17), tasted as if it had been served on a beach straight from the Mediterranean, and the vibrant atmosphere reinforced the sense of a revitalised and confident neighbourhood.

There is nothing quite like the High Line and with a closing time as late as 11pm all year round you still have time to see Manhattan all lit-up on the return leg.

Perhaps Birmingham’s Eastside and Digbeth can look forward to something similar?

Simon Hale travelled to New York with Aer Lingus, taking advantage of its twice-daily service from Birmingham Airport to New York’s John F Kennedy Airport which incorporates an easy connection and US customs and preclearance in Dublin. This saves time on arrival by allowing you to be treated as a domestic passenger. Return tickets in economy are from £229 each way including taxes and charges.

Aer Lingus flies into JetBlue’s Terminal 5 at JFK where the airline opened a new lounge for its Business Class and Gold Circle members this summer. The airline has also launched its new Revival Lounge in the Dublin arrivals hall where business guests arriving from North America can freshen up before leaving the airport. For more details, click on www.aerlingus.com.

For more information on the High Line go to www.thehighline.org and on New York City go to www.nycgo.com.