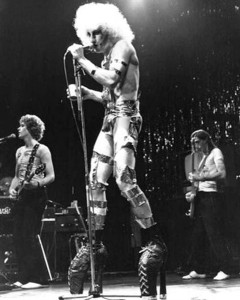 The Tubes
The Robin
August 13th,

The Tubes are touring to celebrate four decades of existence. Always something of a cultish alternative, and quite possibly bringing the punters out in droves due to a certain nostalgic curiosity, this was the last night of their UK leg and the atmosphere was suitably charged.

Hailing from San Francisco, this bunch of japers have always been concerned with the satiric poke, probably closest in killing methods to those of that oft-sleazy documentarian of those heady times, Frank Zappa. Musically, they’d have an uphill struggle matching FZ, but The Tubes are still a band of slick, accurately targeting players, mostly deploying pomp rock motifs, but also hefting in genre tics from the post-Sinatra universe, the prog grandiloquence era and the glam punk struttiness of the New York Dolls.

It’s these other frills that offer the thrills, when The Tubes get into their heartily-mocking pastiche. Even if the music sometimes sounds quite straight and sincere, singer and genial host Fee Waybill will debunk the proceedings via one of his multitude of costume changes.

Speaking of Waybill, it must also be mentioned that this is that rare beast: a tour, decades on, that features virtually all of the original band members, totally communing and surely tighter than ever, as the dates reached their end. Guitarist Roger Steen frequently jolted numbers up by slashing in with a serrated solo, these being impervious to self-mockery. Drummer Prairie Prince stoked with rumbling thunder, rolling around a massive kit that also found space for timbales and bongos, for those Latin outbreaks. Rick Anderson was also there with the propulsive basslines, the line-up completed by strident keyboardist David Medd, a comparatively recent recruit.

It’s not clear whether we’d gain massive satisfaction from lolling around in our boudoirs, airing this set on our domestic sound systems, but in the heat of the fray, The Tubes delivered a stage show that was consistently gripping, entertaining and surprising.

Waybill littered his spiel with the fuck-word, but this was a cover for his informed wit and persistent observations on society’s shortcomings. His overall stance was often superior to the actual content of the songs, even if we weren’t completely caught up in the poodle rawk noodlings of some pieces. Waybill sashayed onstage in a variety of guises, clad in prison garb, television host leisurewear, buttock-revealing bondage leathers and coolster swing vocalist suit. His vocal stylings were suitably authoritative, richly resonant.

He saved the best until last, as alter-ego glam punk giant Quay Lewd tottered on in high heels that must have been two feet thick, his hands on Steen’s shoulders as he inched towards the microphone. Of course, it was the evening’s high-point song, the truly anthemic White Punks On Dope, still sounding monumental, as a powerful mixture of itself and its own absurdity-core. Was he pleased to see us? That’s an affirmative, judging by what lurked down below in his silver spray-ons. Oh, but then Lewd whipped out a bottle of water from his crotch-pouch, bringing a small dose of reality to the fore.