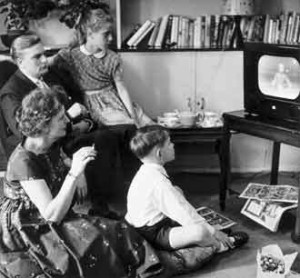 Richard Lutz digs deep for the movie of the week on the box and surfaces with a forgotten crazed cowboy movie that you can’t ignore.

The New York Times called it a “psychosexual melodrama”, one of its stars said he had no idea what this 1954 horse opera was actually about and critics either lampooned it or praised it,saying it was ridden with hidden messages about McCarthyism and the Hollywood witch hunts of the fifties.

Johnny Guitar (Wed, 6.05AM, Sky Star Wars) is like no other cowboy film. It is operatic, some would say hammy and, yes, definitely oddball. Director Nicholas Ray (later to make Rebel Without a Cause) created a movie with the two heroines in a dead eye nasty showdown, with Joan Crawford’s leathered role as an owner of a saloon shooting hated rival Mercedes McCambridge between the eyes.

And in between is quixotic star Sterling Hayden’s eponymous character of Johnny Guitar, a hired gunman who is unarmed except for his musical instrument. So, at first a movie about role reversal, the girls fatally battling it out over land rights and railroads while hunky permed stud Johnny Guitar strums his thang and observes. 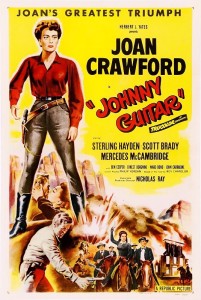 Lots of action off the screen too. Crawford and McCambridge, both hard drinkers, hated each other. The former had an affair with the letter’s hubby. One night Crawford got too smashed and invaded Mercedes’ dressing room, cut up the gal’s costumes and laid them out on a desert road near the set location. McCambridge, an Oscar winner, thought her rival was deranged.

This hatred pours through the stuff going on in front of the camera. You can feel the enmity when the two women face each other and spit dialogue into each other’s face. It’s venomous stuff. Hayden, a tough ex-paratrooper, lay low in the film, keeping out of the way and plunking his guitar. But offscreen he couldn’t stand the hard-headed Joan Crawford.

Hayden later said: “There’s not enough money in the world to lure me into another movie with Joan. And I love money.”

Besides the sexual undertones there is also a dig at the then current McCarthy witch hunts with allusions to rigged courts and unfair trials. The script was written by a blacklisted writer, Ben Maddow, and Hayden had named names under pressure from the FBI (something he later hated himself for).

The movie is eerily shot as if on a stage with big backdrops and locations from the Arizona desert. French director Francois Tuffaut loved the pic, calling it “the beauty and the beast” of westerns with Hayden as the beauty and Crawford the beast.

So, in this talky weird sagebrush film, a lot to take in. Good support from some known names on top of the trio of stars: Ernest Borgnine, Ward Bond, John Carradine.

Ray, as director, has a good grip on a plot about The Outsider coming in to town to make things either better or worse (a trick picked up by Clint a decade later) and some great lines such as gambling den owner Vienna, played by Joan Crawford, telling her croupier: “Spin the wheel again. I like the way it sounds.”

So, one for the hard drive as Johnny Guitar does transmit at some god-awful hour in the morning. And yes, tediously, it is on a channel owned by the loathsome Rupert Murdoch. But it has to be said the creep does broadcast some good movie channels that outstrip, day after day, the Beeb and other terrestrial efforts.