Chance to get close up to classic planes at RAF museum. 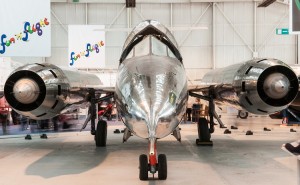 If you’ve ever wondered what it feels like to sit inside a military aircraft that’s seen action around the world, or marvel at the advanced technologies on unique airframes, wonder no more. The Royal Air Force Museum Cosford will be giving visitors the rare chance to climb on board a selection of aircraft and sit in the pilot’s seat during the Open Cockpits Evening event taking place next month.

Over 450 visitors attended the event held in May and organisers are confident that the September event will be just as popular with an exciting line up of aircraft available on the night.

Aircraft confirmed for close viewing include the Bristol Type 188. Built mainly of stainless steel, this aircraft was designed to investigate the effects of heat on aircraft structures at very high speeds. To protect the pilot against heat build-up a special cockpit refrigeration system was installed. Nicknamed ‘Flaming Pencil’, only two Bristol 188s ever flew, a third being used for ground tests.

Other highlights include access inside the Hawker Siddeley Gnat T1, made famous by the Red Arrows. The Gnat was intended to replace the Vampire as an advanced trainer for pilots who would fly jet fighters and bombers, combining high performance with the handling qualities required for effective instruction. A total of 105 Gnats served with the RAF and its aerobatic qualities led to the formation of the Yellowjacks aerobatic team in 1964, leading to the foundation of the world famous Red Arrows the following year. The team flew their red Gnats for fourteen years until they were replaced by the British Aerospace Hawk at the end of the 1979 season.

Visitors to Open Cockpits Evening will also have the rare chance to view inside the cockpit of Supermarine Spitfire 1. The Spitfire is the most famous British fighter aircraft in history. It won immortal fame during the summer months of 1940 by helping to defeat the German air attacks during the Battle of Britain. From the beginning pilots recognised it as a thoroughbred, combining a perfection of design with superb handling characteristics. Although Hurricanes outnumbered Spitfires throughout the Battle of Britain, it was the Spitfire which captured the imagination of the British public and enemy alike. 1,566 Spitfire 1s were built and this machine is the world’s oldest surviving example of its type.

The event, which now runs on both a Friday and Saturday evening, allows twice as many budding pilots to enjoy some of the world’s most iconic aircraft. Just 300 tickets per evening are available for this exclusive event, ensuring visitors have plenty of time to get a feel for what it was like to fly the aircraft, ask lots of questions and take photos as memento of their visit.

RAF Museum Cosford Event Manager Abi Betteridge said: “Museum visitors are always keen to see inside the aircraft we have on display and events like these are the perfect opportunity to make a visit to the Museum extra special. We try to offer a real mix of aircraft type for visitors to climb on board during Open Cockpits Evening, so whether it’s a fast jet to spark interest in the younger generation, or a nostalgic wartime aircraft that brings back memories for our older visitors, we have everything covered.”

Visitors will have exclusive after-hours access to the Museum which displays a collection of over 75 aircraft, military vehicles, engines and aviation artefacts within three wartime hangars and the award-winning National Cold War Exhibition. As an added extra, visitors can experience the thrills of powered flight on board the Flight Simulator and 4D Experience at a special discounted rate.

Tickets for the popular event are now on sale through the Museum’s website www.rafmuseum.org/cosford, with just 300 tickets available per evening. The Museum will close at 5pm on each Open Cockpit Evening in order to set up for the event and the evening will commence at 6pm and finish at 9pm.

Admission is by advance ticket only; tickets cost £12.50 per person (Lightning Members price £10.00 per ticket). Parking charges are included in the ticket price. Minimum height restrictions of 1.07 metres will apply.