The Hive in the Jewellery Quarter have worked with artist Iona McCuaig and participants from a women’s group from Restore Birmingham to create a new exhibition, Shakespeare Im.Print, for the Shakespeare Memorial Room as part of the Everything to Everybody Project.

The free exhibition runs from 8th December until 25th February 2023 and is a response to the prints, illustrations, signs and symbols that are part of the Shakespeare collection housed at the Library of Birmingham which comprises over 100,000 items from all over the world about and inspired by Shakespeare.

Of particular inspiration to this new exhibition – which will feature work created through mark-making, mono-printing, collage and metal embossing – are the fine printings and artworks featured in the collection from artists such as Picasso and Salvador Dali. The collection also includes limited and private press editions from Birmingham’s very own school of Printing. 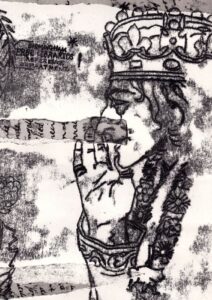 Naomi Clarke, Community Outreach & Learning Manager at The Hive said: “The Shakespeare Collection is vast and so varied, and we were so inspired by the items we were able to see and also surprised by the items it includes. Each of our participants were given a sketchbook when they visited the collection and guided by artist Iona McCuaig to capture their visit through discussion, words, notes, drawings and photographs. These sketchbooks then supported the development of the wonderful new artworks that are now on show in the Shakespeare Memorial Room.”

Inspired by a set of colourful illustrations by Jean Cocteau dating from 1926 including stage and costume designs for Romeo and Juliet and also the bindings and reliefs of Sentiments and Similies of William Shakespeare by Henry Noel Humphreys dating back to 1857, this unique exhibition will include monoprints and embossed panels created by the participants along with previously unseen items from the collection.

Professor Ewan Fernie, Everything to Everybody Project Director said: “The vast Shakespeare Collection at the Library of Birmingham – owned by all the people of Birmingham – never fails to inspire. You might be interested in theatre, illustration, literature, politics, international relations, or product placement in programmes: there will be something in it for you. We can’t wait to show off the new artworks which have been created by the groups working with Restore and The Hive, and which will bring the collection to life in a uniquely colourful way. Do come up to the Shakespeare Memorial Room and see for yourself!”

The Everything to Everybody Project is an ambitious celebration of one of the UK’s most important cultural assets: the Birmingham Shakespeare Memorial Library – not just the first great Shakespeare library in the world but also the only great Shakespeare collection which belongs to all the people of a city.

To achieve this, Everything to Everybody is working in conjunction with anchor institutions and arts organisations such as The Hive in the Jewellery Quarter.

Find out more about this project and others here.