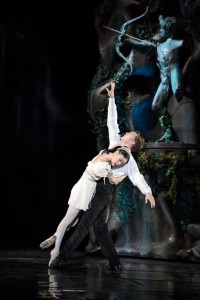 With echoes of A Midsummer Night’s Dream, this summery show sees Eros (Mathias Dingman), disguised as a dapper gardener to an Italian count, magically taking hosts and guests at a house party to a fantasy world to sort out their marital strife.

They include Silvia, a governess-turned-nymph (danced by Momoka Hirata) and Amynta (Joseph Caley), transformed from the count’s valet, whose blossoming romance has been threatened by the ‘dolce vita’ lifestyle.

Cue the count (Tyrone Singleton) swapping a champagne glass for a vine to capture Sylvia ‘Tarzan-like’ as the woodsman Orion before seducing her in his cave, and for the stylish contessa (Céline Gittens) to reappear as a Goddess in hunting garb complete with helmet and spear before blinding Amynta for spying on her nymphs.

But this is a romantic comedy that demands a happy ending – achieved with the arrival of a pirate ship carrying a nutty looking crew, with slave girls to sell, and a captain who dances with a peg leg who just happens to be Eros in disguise.

As sight and love are restored, Hirata and Caley performed a pas de deux so enchantingly that it brought ‘bravos’ from the audience on opening night. Singleton and Gittens also reinforced their standing as a terrific dance pairing.

The dexterity of other pairings was shown in the hilarious comic asides of Kit Holder as Gilberto/Gog and Lachlan Monaghan (Giorgio/Magog), while there was some tremendous ensemble dancing by Arancha Baselga (Neptune), Angela Paul (Mars), Laura Purkiss (Apollo) and Samara Downs (Jupiter).

This must-see show – the perfect escape for a summer evening – is built on a ravishingly melodic score by Delibes, played beautifully by the Royal Ballet Sinfonia under Koen Kessels.

Sylvia is in production at Birmingham Hippodrome to Saturday, June 27. www.birminghamhippodrome.com