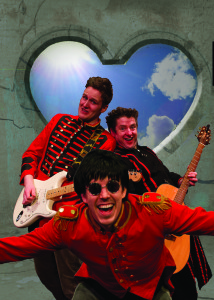 This summer, mac birmingham has a full season of events in its outdoor arena. Come rain or shine visitors young and older can enjoy open-air cinema screenings, theatre performances and music.

Back by popular demand is One Beat Festival (25th July) with rock duo God Damn as the headline band – their performance at the festival will follow their stint as support band for the Foo Fighters this May. In addition the Spooky Men’s Chorale (20th August) – Australalia’s humorous but no less fine of voice choir, offers an original repertoire including a mock Sufi ode to the Bee Gees.

Theatregoers with a love of Shakespeare and musicals are in for a treat. The Festival Players perform As You Like It (27th June), with an all-male cast and songs set to original music by Johnny Coppin. Oddsocks offer two productions – Twelfth Night (18th July) and Much Ado about Nothing (19th July), which features well known UK music classics It Must be Love and Holding out for a Hero.

This year’s theme for mac’s Sundown Cinema under the stars is Monsters and Mayhem – four classic movies from the 70s to the 80s – Ghostbusters (24th July), Back to the Future II (1st August), Jaws (14th August) and Aliens (22nd August). Be prepared to dress up, winning tickets to the next screening, while consuming filmed related food, mocktails and cocktails.

The season concludes with a sing-a-long Frozen (29th August) screening – suitable for the whole family. Dress as your favourite character while enjoying themed refreshments and expect Frozen themed surprises.

The full outdoor season is now on sale from www.macbirmingham.co.uk/lets-take-it-outside/