New play presents a nation deprived of its greatest passion. 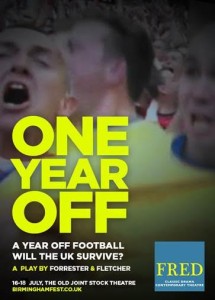 Imagine a country without football. In this surreal comic dystopia, a ban has been imposed on the ‘beautiful game’ in all its forms for twelve months. Told through the eyes of four people defined by football, this is a play about grief, desperation and delusion, and how we confront challenges to our identity.

One Year Off, which will be premiered in Birmingham in July, focuses on a far from perfect world where the country loses its greatest passion.

The new play, by writers Forrester and Fletcher, will be performed by FRED Theatre Company at The Old Joint Stock Theatre as part of Birmingham Fest from 16th–18th July.

“The play tells the story of a one-year blanket ban on football in the UK – and features the Ricoh Arena as one of the characters,” said one half of writing duo, Olly Forrester.

“With all the politics, speculation and column inches surrounding the Ricoh in recent years, we thought it would be interesting to give the stadium a human voice and see how it would react to one year off football. We think local audiences will enjoy the character of Ricoh and the satirical look at the Arena’s relationship with Coventry City Football Club.”