Richard Lutz leaves Scottish journalism and heads for the back channels of England newspapers.

I left the freelance agency in Scotland after a fit of moral pique. I quit rather than continue turning over people for page leads at the behest of the high paying tabloids. I headed for England. 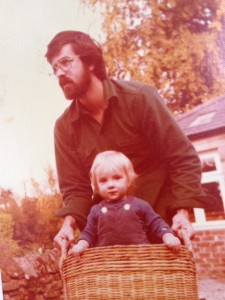 I made it down to Newcastle’s morning paper The Journal south of the border with Jane, our four year old, Matthew, and our newborn, Tom. They were barely tucked up when an industrial maelstrom slammed into us; the National Union of Journalists took strike action. We tightened our belts. New town, new job, first mortgage, two little boys, no family fallback and an imminent strike.

Then, something really hit us unannounced. It was sudden, drastic. The day we were to move into a new house, the day before the walkout, I was rushed to hospital and had my appendix whipped out with suspected peritonitis. Jane said I was green as the ambulance roared away with me. I felt as if there was a samurai sword twisting into my innards.

I came round to see on the hospital TV the picket lines outside my offic e- including my own local negotiator John Toomey barracking those that crossed the line: “NUJ stands for National Union of Journalists. Not Newcastle Union of Journalists,” he harangued them.

I asked the nurse for the exact date, to the hour actually, that my sick note started. She shrugged, said something inscrutable in Geordie, and bustled away to unearth details. She returned. I had been signed off officially the day before the strike. In what turned out to be a mean, nasty six week industrial dispute, I semi-guiltily took home legitimate sick pay while colleagues lived on £15 weekly emergency funds.

We felt terrible. For weeks we would anonymously send Post Office cheques to my local union. The meetings, getting testier and more divisive, would hear under AOB about “another cheque from our well-wisher.” As I stumbled out of strike meeting after strike meeting, I didn’t know whether to feel proud, smug or just plain sad that so many with families were reduced to emergency hand outs while I was secretly luxuriating on the full whack.

The strike eased off with the usual double-talk. Both sides said they won. Back to work.

The Journal shared a newsroom with two sister papers , the down to earth Evening Chronicle and the brainless Sunday Sun. The evening paper’s top dog at the time was a big (I mean, really big) rock of a guy called Mike Curry. He was muscled-out, always seemed to wear black short sleeve shirts too small for him and leaned against the grubby newsroom wall, cigarette in mouth, a two day stubble and with a small team of acolytes around him. The news desk didn’t tell him what to do. Curry told the news desk.

With that choppy hard-edged Tyneside accent, he was straight out of Get Carter…

He was a good reporter, instinctive, and he worked endlessly when a big story blew up. And late one night, in the sleepy wee hours, it really blew up. A factory boiler exploded in Gateshead, right across the Tyne from the office. Three were killed, dozens hurt.

We morning paper staff showed up in the newsroom to see Curry, Marlboro in his mouth, his stubble even stubblier, bashing out his last re-write. He’d  been there ever since the factory went sky-high. He had filed for the first early edition and each one after, complete with the necessary family photos of the fatalities with their Newcastle United tops, and first hand reports of the lucky survivors  and the terrible stories from the relatives who lost a brother, a father, an uncle. The last edition, the City, even had a diagram of where the boiler was in the ill-fated factory when it blew. Curry carried that paper.

But one day he disappeared. Gone.

Rumour had it he went to Hong Kong. Others said Manchester or London. He never resurfaced. People saw him here or there, it was said, and my guess was that those who actually knew his whereabouts were’t saying much.

After the strike, I did the obligatory rostered late shifts, catching a late snap or a splash for the last edition which went to bed just after 2.30 am. There was always a chance something would pop up on the calls and you could cop a big byline.

But it seemed no matter how good the late story I found, it got pushed off the front page by big time historic news: actor Steve McQueen dying wiped out my lead on a North Sea rescue off Bamburgh; the Teheran US embassy siege killed my splash on a plane crash high-up in the Cheviot Hills; and the axe attack at a Wallsend pub was chucked when 900 cult followers committed suicide in the Guyanan jungle.

Finally,I began looking for a speciality after I got my knees stuck under the desk. You need a beat, a corner to call your own. The editor, Phil (Growler) Crawley, as opposed to deputy editor Stuart (Grunter) Garner, asked if I wanted to cover medical stories. Well, it was a godsend because almost all health tales spin round a narrative. My first one was about a lovely lady whose eyesight suddenly was restored after decades of being blind. I took her for a ride through her beloved Newcastle (“Why, aye, there’s Greeey Street. How luv’lee…“). 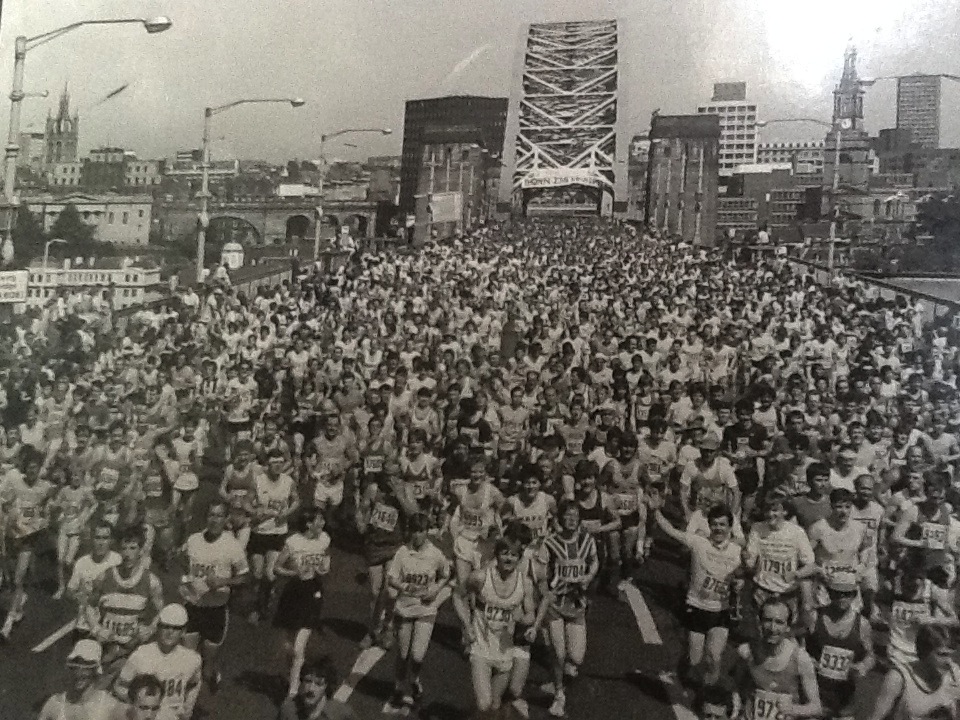 Of course, once again as in Scotland, I learned that the dry dusty meetings contained the shreds of good material, once uncovered. And I quickly learned that the best, most reportable, stories were secreted away from the public under ‘Confidential’ when all hacks were politely but firmly ushered out of the room. This was when the real meat of the North East’s health service was discussed, argued, hammered out. This was how the NHS worked in this part of England. Anything important seemed to be ferreted away.

One day, a board member asked me, politely asked me, if I wanted to see the papers listed under Confidential. He was a retired shipyard worker who believed the people owned the NHS. And, more importantly, they had the right to know what was happening to their GP services, their hospitals, their medical research funding.

I went to his modest house. There, over a coffee served with plain biscuits, he laid out on his dining room table the secret reports in a fan shape. He tapped one: “This is they one y’want.”

He was right. It was a document outlining the proposed closure of a children’s unit for tiny babies, a highly emotive story in any part of the UK.

Month after month, Les would  have me over the night after the health meetings and we’d go through the reports that meant so much to Tynesdie people. The documents would be spread across the table, still fan-like and, if I seemed obtuse, he would emphatically tap the document that would send waves throughout Tyneside. I was happy with this monthly motherlode of stories. Les was happy that Geordies were getting the full facts. We both benefited.

As a correspondent I knew, thought, that things had to gear up. If I wanted to remain a specialist, stay off the dreaded taxi rank of reporters waiting for jobs, I had to produce material and stay one step ahead of the medical reporter on the Northern Echo or my sister paper the Evening Chronicle. So I asked Les if I could have the stories the day before the meetings so the morning front page could shout how board members would debate the touchy subject that day “behind closed doors…”

I was ahead of the game. Growler loved it. Once he called me in and asked me for my informant’s name. “Someone in the NHS wants it.”

He barely smiled. “I had to ask,” he said. “I don’t expect an answer.” He never got one. He was okay, Growler.

Soon after, the supine press officer for the city’s health authority called me. He needed names too. His bosses wanted to know who was leaking like a drain. He warbled some gobbledegook about confidentiality and the right to keep contracts and sensitive problems out of the media. I think he even realised how old-fashioned it sounded: Gosh, people actually knowing how their local tax-funded NHS operated. Can’t have that.

In the newsroom, below Growler and`Grunter, who were solid professionals, was the news editor. His name was Piers Merchant and he ultimately became a Tory MP, somehow winning a Conservative seat in the Labour-dominated Newcastle inner city area. He went down to Westminster and within years had immolated. He was stung by the Sun, not once but twice, in a sex scandal. And when Mrs Thatcher saw the headlines, he saw the writing on the wall and escaped to a new party called UKIP. He died from cancer after losing an election, leaving a young family.

Outside of the NHS, it seemed the whole county was shaky. And with the economy imploding during that time, the north-east of England was getting hit very hard: shipyards, coal mining and heavy manufacturing all going down the tubes. That’s why the main specialist job was the industrial correspondent’s post. Andy Lorenz, who eventually migrated to the Sunday Times, made it his own. He would begin banging out story after story from about 5 pm. Sometimes he would file six or seven pieces in a night – front pages leads, inside leads, single columns, backgrounders, help with the incessant editorials about the need for government help.

Andy’s real love, though, was film and, when not immersed in industrial copy, he could debate the merits of Kurasawa or Peter Weir while pounding his typewriter about lay offs, shutdowns and factory floor rows till the clackety old Olivetti almost went through the top of his battered metal desk.

As most other copy was finished just when he was in full flow, Andy would become the butt of newsroom interest as pressure lifted from the rest of us. Someone would steal the bacon from his beloved early tea. He would find his shorthand notebook, with all the quotes and notes for his nightly stories, had leaped off his desk and disappeared of its own accord.

And I especially remember someone setting his copy alight as it spewed off the typewriter roller. I would remember this episode because it was me. “You’re fucking setting  my story on fire,” he shouted, incredulous. Growler popped his head out from his office and watched Lorenz’s copy being doused by a cold cup of coffee. He used to be industry reporter once himself in his youth and knew how hard our Andy worked. Andy loved the attention.

One of the sections I enjoyed most were the property pages.They were my comic relief. The Journal not only covered blue collar Newcastle but some pretty ritzy parts of Northumberland too. I liked how the page editor, a dullard called Dave, wrote the same story week after week: “Now’s the time to buy,” it would crow incessantly.

In time, some of the medical stories I wrote were picked up by TV. BBC producer John Mapplebeck enlisted me in one or two of his programmes. He was a wise head on a big pair of shoulders and guided me into the world of pictures and scripting. And once I got the smell of a recording studio and a camera crew, my eyeline changed. I wanted in to TV.

And it would happen. Not in Tyneside but in Birmingham, a city I only knew as an urban landscape that you roared past as you rolled down the M6.