Simon Hale goes up in the world in New York. 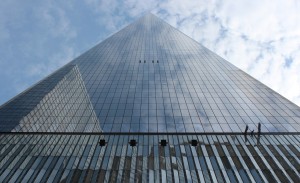 The high-speed lift rises almost a quarter of a mile through more than 500 years of history in only 47 seconds.

It arrives after the ear-popping ascent at a viewing platform offering a unique panorama. Here in the Observatory 1,250 feet atop the One World Trade Center in New York City, you can see for up to 50 miles and in clear sky on our media visit the views are spectacular.

The dwarfed Empire State Building to the north and the venerable Brooklyn Bridge to the east look like matchstick models. To the west you can spot the flashy new shipyard apartments of New Jersey and to the south you can almost reach out to Lady Liberty.

These and other landmarks, along with the tourist helicopters hovering like bees below, are visible in all their glory from the tallest building in the Western Hemisphere.

But New York’s latest new attraction isn’t just high on views. The Sky Pod lifts that take you from ground level to the 102nd floor almost merit the admission charge alone.
You experience an amazing virtual time lapse of New York City’s skyline, from the grassy swamps of the 1500s to the present day skyscrapers using floor to ceiling LED technology.

There is more LED action at the See Forever theatre experience – a video presentation at the 102nd floor entrance to the Observatory that shows the rhythm and pulse of New York life just before you receive your first glimpse of the stunning skyline.

There is also an interactive concierge service, City Pulse, that provides a guide to New York’s wealth of attractions through a ring of video monitors. Unlike the CN Tower in Toronto, there is no glass floor in the Observatory to test your courage by walking across, but instead a 14-foot circular disk, the Sky Portal, giving nonetheless an eye-popping real-time video feed of the streets below.

Not all the thrills are at sky level. You are welcomed at the ground floor entrance individually by your country and language using data from ticket scans. You are then ushered into a Voices show where you can hear through individual monitors the personal stories of the men and women who built the One World Trade Center.

The tragedy of 9/11 that led to the construction is barely touched upon – though dealt with in depth in the memorial museum next door – but the interviews are moving in their accounts of courage and resilience and their optimism for the future.

Next stop are the building’s foundations where you learn about the granite bedrock that anchors the 45,000 tonnes of steel super structure. You notice a result when you stroll around the 360-degree Observatory without detecting any building sway.

The descent from the 100th to 102nd floor public-viewing levels is even more arresting as you feel the extraordinary sensation of swooping gracefully like a bird between the landmark buildings towards the city streets.

If you want to take in the views from the Observatory over a drink or a meal, the attractions also include a café, bar and a fine dining restaurant. Although you receive timed tickets there is no restriction on the time you spend there.

David Checketts, Chairman and Chief Executive Officer of Legends, which operates the Observatory, told me what it means to New York: “This is a tribute to the courage and resilience of New Yorkers and their determination to move forward as a free people.”

He added: “Visitors from Birmingham will be able to experience the most spectacular views in the world, great food in our restaurants, and use technology to learn more about New York.”

Birmingham Airport now offers two direct flights a day to the Big Apple – by American Airlines to New York’s John F Kennedy Airport and by United Airlines to Newark’s Liberty Airport. Aer Lingus also offers a service twice a day from Birmingham to New York JFK with an easy connection and the benefit of US customs and immigration preclearance in Dublin. This saves time on arrival by allowing you to be treated as a domestic passenger.

The One World Observatory is located at One World Trade Center in New York City. Tickets priced at $32 (around £20), with concessions, are available for timed admission in advance at www.oneworldobservatory.com