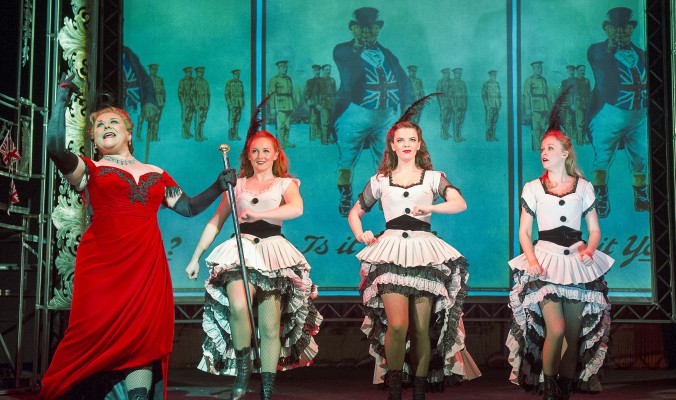 It’s into the trenches as the lions are led by donkeys. Richard Lutz grabs his tin helmet at the Birmingham Rep for this biting First World War satire.

This is a technically brilliant and trenchant play about the World War One murder machine that killed something like 10 million men with another 7 million missing.

The new production of Oh What A Lovely War,directed by Olivier Award winner Terry Johnson, uses the structure of the original 1963 play with its end of pier vaudeville feel to bring home the bloody travesty of this European holocaust spurred on by feudal dynasties, stupid political leaders and bone headed generals.

Using music hall songs, comedy and soldiers’ songs from the era, it leaves an audience emotionally drained, shocked and angry.

Just how could General Haig send wave after wave of men over the top into machine gun fire? How could Germany launch mustard gas? How could so many leaders be so thick? 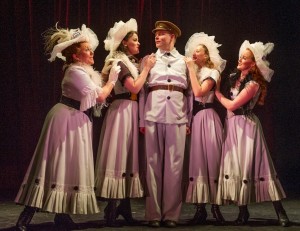 The originator, radical producer Joan Littlewood, put her heart and soul into the Stratford East production back in the sixties and were she living, she would have approved of this slick, technically superior play at The Rep

It is a fast, sharp production with an able cast melding humour, wit, bathos and physical theatre to show the kaleidoscopic nightmare of war, both at the front and back in Britain.

Everyone, it seems, from George Bernard Shaw, to Kaiser Bill to the forgotten troops are portrayed. And a very modern scrolling digi-board gives you a brutal diary of events and casualty figures (alarming even today) to frame the progress of the carnage.

What comes through is the black humour and fatalistic bravery of the troops caked in blood and mud as four years of madness took its toll.

Sadly, the Rep’s big auditorium swallows some of the banter, the lyrics and quick fire jokes. It is a pity that so much professionalism goes into the play but some is simply lost with mediocre acoustics.

Still, despite its age, Oh What A Lovely War strikes home. And is still sadly relevant today