The ultimate food event in Birmingham has been given a further boost after securing Birmingham Airport as headline sponsor. 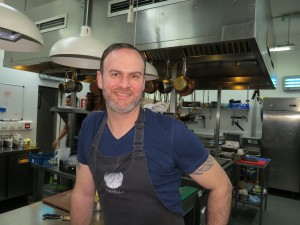 Glynn Purnell’s Friday Night Kitchen with Friends will see the Michelin-starred chef and MasterChef judge Gregg Wallace join forces to serve up a live culinary experience in front of 400 guests at Aston Villa Football Club on Friday, 2nd October, and will raise funds for Birmingham-based blood cancer charity Cure Leukaemia, of which Glynn is a Trustee.

Paul Kehoe, CEO at Birmingham Airport, says: “We are proud to show our support to such a prestigious event, which truly showcases the city’s rising culinary reputation. Birmingham’s rich dining scene has made it an international selling point for the city, and this event will only highlight this further.”

Hosted by TV foodie Gregg Wallace, the evening will see Glynn Purnell prepare four courses on stage, with the first course being brought to guests by TV personality, chef, singer and actress Rustie Lee. The audience will enjoy each course prepared under Glynn’s specification and guidance and served by the catering team from award-winning VMF Restaurant, managed by Villa’s Executive Chef, Peter Reed.

Jackie Kelly, Head of Corporate Partnerships & Special Events at Cure Leukaemia, says: “I am delighted that the event has attracted more key support this year, including our headline sponsors Birmingham Airport. I would like to extend thanks to all our wonderful sponsors to date who have shown their support to the event. This support means we are closer to reaching our target of £50,000 on the night.

“We hope more businesses join us for this amazing food experience right here in Birmingham. With great food, fine wine and entertainment including the live covers band The Subterraneans, and Russ Morris of Heart FM providing a disco until late and with a relaxed dress code, it’s definitely a Friday night not to miss.”

Glynn Purnell adds: “I’ve been proud to develop and host this event in aid of Cure Leukaemia for the past three years and its popularity has grown each year. This year we’re going even bigger and better to create a fun Friday night with a difference.”

For more information on the event Email Jackie Kelly on [email protected] . Tickets are now on sale, starting at £125 for standard and £150 for VIP seats.