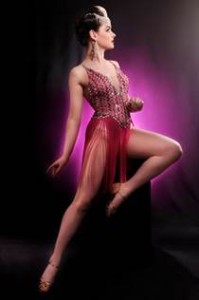 This Thursday sees the launch of the first-ever Birmingham Cabaret Festival, hosted by the Old Joint Stock Pub and Theatre. From 14th-30th May, the intimate OJS Theatre in the city centre will play host to some of the most well-known names on the UK cabaret circuit.

Cabaret has undeniably undergone a renaissance in the past couple of decades – music, comedy, circus, drag and burlesque acts, to name a few branches, frequently dominate the headlines at festivals and venues across the world, and cabaret is often the place to discover the newest and most daring cross-disciplinary theatre. London has been enjoying the flourishing, thriving and multi-faceted scene for many years, and it’s something the festival will be bringing to the second city.

Thursday’s opening will be marked by a sell-out burlesque and variety night, The Footsie Club, a new evening of sizzling world class and award-winning performers including Missy Malone. Bask in the secluded decadence of the elegant venue for an exclusive evening of the most delectable femme fatales, quirky comedy, and extraordinary performances to surprise and delight you, up close, and personal.

Other highlights of the festival include a performance by the one and only Gentleman Juggler, Mat Ricardo on 16th May. Mat is a leading speciality act of the British cabaret revival and the UK’s most successful juggler, presents big laughs, serious skills, slapstick, and breath-taking spectacle. See genuine danger, dexterous elegance, and thrills, and of course high level circus, performed by a man at the top of his game.

He beguiles his audience with both old favourites and signature routines, including some tricks that haven’t been performed for decades, and some that have never been performed before at all. Oh, and one that killed a fellow juggler in 1936.

In 2014 Mat returned to the Edinburgh Festival Fringe by popular demand, following a sell-out season in the West End, made many high profile television appearances, and in 2015 was invited back for a 3 date run at the Southbank’s Mime Festival, a rare honour. Mat was the first variety performer to be invited as a guest on ITV1’s Jonathan Ross Show, is the star of the famous Unum tablecloth trick TV ad campaign, and appeared on new prime time BBC1 Magic Show Now You See It.

Headlining the festival on 29th and 30th May will be EastEnd Cabaret, an award-winning cult comedy duo who will be bringing their raucous and risqué musical comedy show direct from a smash-hit tour of Australia and New Zealand!

With an arsenal of cleverly naughty songs and the sharpest wit around, Bernadette Byrne (deviant diva) and Victor Victoria (half-moustachioed musician) will seduce you with their unique brand of “jaw-achingly funny character comedy” (Backstage Pass).

Tickets for all the performances are on sale now, and a few are even sold out. For the full line up, visit www.oldjointstock.co.uk, or call 0121 200 0946