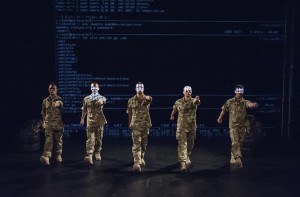 Birmingham choreographer Rosie Kay has taken a quintet of young dancers, sent them to a military training camp, had them visit a war rehab unit and then created an exquisite night of movement at The Rep.

Sadly, this is the last night of the performance in the city before it begins a national tour which includes army camps and drill halls. 5 Soldiers is simply a five star must-see however you view the armed forces.

The dancers create the world of young recruits – four men and a woman – as they learn to live and train before ultimately heading for the Mid East conflict.

The troupe begin with the listlessness of waiting for their work to begin before the relentless geometry of square-bashing. The computerised movements morph into more fluidity as they get to know each other and trust each other.

There is laddishness, bullying, fighting, working out, goofing off. And in a night of clubbing, the four men watch  their female comrade transform from a stern soldier to a sensuous woman – there is lust, then tenderness, then friendship. It is a beautiful and evocative sequence.

Electronic backdrops create everything from a military camp, to the digital war that intelligence plays to the chopper flight to the war zones… to the inevitable injury that ends in a rehab unit.

It is an outstanding performance backed by great music that leaves politics behind whatever your opinion on Iraq, Afghanistan, Trident or the modern role of the military.

It comes down to how 5 soldiers change and then form concrete links in a dangerous job.