Not so much food as social phenomenon, Andy Munro has finally written the definitive guide to the great Brummie tradition. 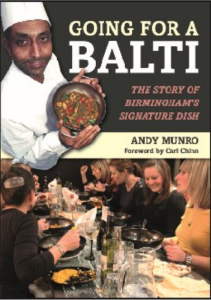 The Birmingham balti has received worldwide recognition and acclaim everywhere from Rough Guide to the New York Times. But more than that it was won a place in the hearts, minds and stomachs of food lovers everywhere.

Now for the first time, the real story behind the curry phenomenon that is Balti (and what it means to the city where it was born) is told by Brummie and self-confessed ‘Baltiholic’, Birmingham Press writer Andy Munro.

Andy was born and bred in the Balti Triangle and he has become a passionate champion of Birmingham’s signature dish, working with local restaurants to apply for a European Food Trademark of Authenticity. He says, “For Brummies, going for a balti has been as much about a recreational pursuit over the years as the enjoyment of the dish itself. The Birmingham Balti not only helped break down cultural barriers but has become part of the city’s social history. Hopefully, the book will ensure that this rich culinary heritage is preserved.”

Going For A Balti is published by Brewin Books and is packed full of illustrations, anecdotes and, of course, a few recipes.

With a cover price of £7.95 it’s available from WH Smiths Waterstones in the city centre, the usual outlets or visit www.balti-birmingham.co.uk