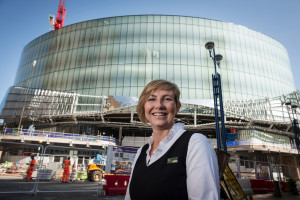 John Lewis has started its six month countdown to the launch of its flagship Birmingham shop, which will open its doors in September.

The 250,000 sq ft department store will be the anchor tenant of the new Grand Central retail development, which sits above the redeveloped New Street Station in the centre of the city. One of the largest John Lewis shops outside of London, the Birmingham shop will be the business’ first full-line department store to open in four years and represents a £35 million investment by John Lewis in the city.

John Lewis Birmingham will showcase the best of the department store’s offer, allowing customers to shop from more than 350,000 products from the retailer’s full range, including those leading the latest fashion, furniture, homewares, beauty and technology trends.

Recruitment for over 650 positions at the new shop is underway with some specialist roles, the majority of jobs will go live in May.

Head of Branch Lisa Williams said: “With less than six months to go until opening the shop is beginning to take shape and the excitement is really starting to build. John Lewis Birmingham is going to be our regional flagship shop – one of our largest – and will bring the very best John Lewis has to offer to the city. I’m really looking forward to being an active part of the local community and welcoming our customers to what will be a very special retail experience.”

Leader of Birmingham City Council, Sir Albert Bore added: “The scale of John Lewis’ investment in Birmingham demonstrates real commitment to the city and clear recognition of Birmingham’s growing role as a leading destination outside of the capital – for business, leisure, and tourism.

“Not only will John Lewis – as anchor tenant in the Grand Central development – play a key role in regenerating the south side of the city, but by joining Birmingham City Council in signing the Jobs and Skills Charter and providing more than 650 new jobs for local people, the shop will also have a positive impact on the future of hundreds of the city’s residents and their families.”

Housed in a landmark four-storey building above the newly-redeveloped New Street Station, the busiest railway station outside of London, the shop will be one of the most conveniently located department stores in the country. Its station site also ensures that it is ideally located for commuters to collect purchases via johnlewis.com’s Click and Collect service when going to and from the station.

Ashley Innis, Grand Central Communications and Engagement Manager said, “It’s an exciting point in the Grand Central journey as we mark six months until opening. We are making great progress with the development and the recruitment process is underway thanks to the Birmingham Growth Alliance Partnership which has worked very closely with John Lewis for almost two years.

“The investment John Lewis has made to Birmingham further supports the growth of the city and maximises the opportunities available for local people to work for a leading premium retail brand.”