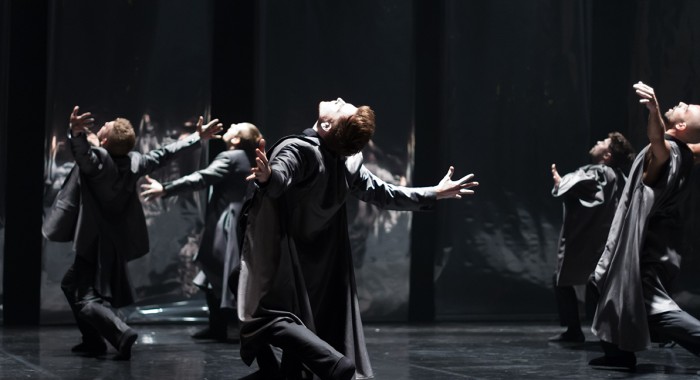 An all male group from Hereford kicks off an 8 week dance festival in Birmingham. Richard Lutz reviews opening night

Choreographer Tamsin Fitzgerald wanted to create a piece about memory that reflects on the past. The backdrop to her work, Lucid Grounds, is long narrow strips of silver material that throw fractured mirrored images of the five man group called 2Faced Dance.

The dark stage at the Patrick Centre is lit by the these reflections, these ‘memories’ and the performance are graced with a fluid constant movement backed by music from Alex Baranowski and Angus MacRae- both Tony award winners from New York’s Broadway.

It takes a power and an endurance to perform solidly for thirty minutes. But the this young troupe work at it successfully, using modern dance, acrobatics, street performance and gymnastics to glide through the piece, part of a double bill running under the title Dreaming in Code. The performance was a solid and memorable work to open the Dancexchange spring season which lasts until May in Birmingham.

The earlier part of this double bill is less of a success, though more imaginative and daring. The quintet, seemingly on a remote camping trip, bounce off each other, both emotionally and physically, to try to connect. Sometimes they do. Sometimes they don’t.

It is an evasive, oblique, sometimes angry piece, about communication and there are some daring dynamic leaps which could end badly except for smooth co-ordination, and trust. But the piece is interspersed with a jarring narrative that gets in the way of physical movement. And words, many times, is just not needed in a night of  contemporary dance. But, still, full marks for trying. 2Faced Dance is a young troupe and they are giving it a go.

For more on this spring festival: