Simon Hale has A Night to Remember. 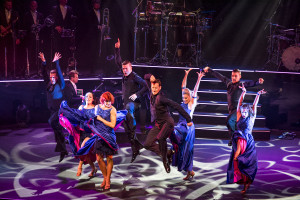 Strictly Come Dancing star Brendan Cole had plenty of spring in his steps hosting his latest show on the last night of a 48-date tour at Symphony Hall.

There was a palpable energy surge every moment the first-ever winner of Strictly – with Natasha Kaplinsky in 2004 – came on stage alongside his fellow professionals to dance live with his band on a day in which he had got up at 4am to watch the World Cup cricket final.

The New Zealander, who is a keen follower of the game, put what he said was the pain of his side’s defeat to Australia behind him to give a show-stopping performance in A Night to Remember.

The packed predominantly female audience was soon swooning over Brendan’s shirt-unbuttoned swagger and pelvic thrusts. When he leapt off the stage to give a girl a birthday kiss, there was no shortage of other women in the audience with a birthday that day.

A saucy question and answer session brought some light on Brendan’s favourite dance partner from Strictly (“Sophie Ellis-Bextor,” he said), and how he keeps his “little soldier from standing to attention” when dancing with his beautiful leading ladies (“wearing pants and being professional”).

This overlong diversion interrupted an evening that sparkled with pyrotechnics and just about every dance style from the TV show and more, performed brilliantly by Brendan with French Dancing with the Stars champion Fauve Hautot and six other professional dancers.

There was also some first-class singing from Iain Mackenzie and Julie Maguire and great support from a band that belted out high-octane numbers ranging from Uptown Funk to Bon Jovi’s Living on a Prayer.

Touching was a Viennese Waltz, Cinderella, choreographed from a sad song by Steven Curtis Chapman about a father and his daughter (“my favourite of the show,” Brendan confessed, “it resonates with me as a fairly new dad”). One of the most beautiful dances was a foxtrot to Nat King Cole’s Unforgettable (“we’re not related” he added, just a little surprisingly).

A couple of jive numbers that rounded off the evening brought the entire audience to its feet – and there were screams of delight when Brendan announced that he would be returning to Birmingham with the same show next year. Certainly A Night to Remember.