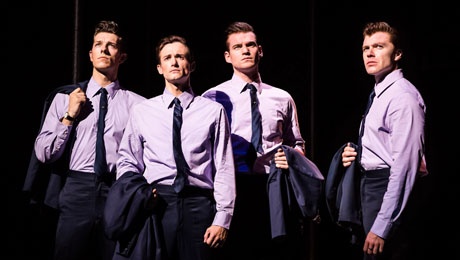 Richard Lutz remembers how the Four Seasons were king-dogs of radio back in the early sixties. And, today, are staying alive with the musical that has gone ’round the world.

The rock guitarist Mike Bloomfield once said: “Music is the history of your life.” And casting aside how trite that sounds, he has a point.

I remember where I was, what I was doing, who my pals were when I first heard all sorts of stuff. I’m sure everyone has been there. And that goes double for a certain Francesco Castelluccio. Or to most: Frankie Valli, falsetto lead singer with the Four Seasons.

Back in the sixties, the New Jersey group really pre-dated the Brit onslaught in hometown New York and neighbouring New Jersey. And, for a while, held them off with such hits as Rag Doll, Let’s Hang On and Walk Like a Man.

Of course, America did have a wealth of homegrown sounds pouring out of the radio anyway: Elvis, doo-wop, the Four Tops, soul, Johnny Cash, crooners like Perry Como and Tony Bennett, and greaser groups like the Shirelles or the Shangri-las. 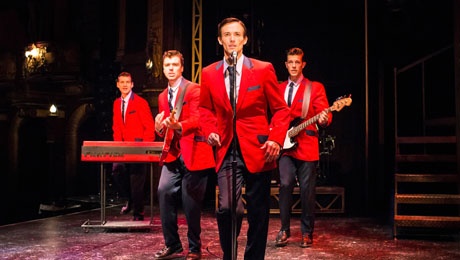 But then there was Frankie Valli – and that  plaintive vocal sound – a world now re-surfacing with the musical Jersey Boys which comes to Birmingham’s New Alexandra Theatre starting next week for a month.

In New York, in my early teen years, on the way home from school, there wasn’t a bus that didn’t have three or four guys in the backseats singing Sherry or Big Girls Don’t Cry with that big harmonic acapella sound and that crazy reedy high voice that could crack ice on a cold day. What kid didn’t try to be Frankie Valli at least once walking down the street, in the shower, in a car?

Of course, New Jersey (which could roughly be akin to England’s Essex as a cultural icon) may be looked down upon by its gargantuan neighbour NYC. Its denizens seen as a lower form of life by New Yorkers. But it did nurture mega-talent in Bruce Springsteen, Whitney Houston, George Clinton, Debbie Harry and the Rascals. Plus, dipping into my trivia box, it was the state where Thomas Edison invented the phonograph, for God’s sake, the device that lifted the music scene into the stratosphere.

And to amaze your friends and bore the socks off someone in the pub, there must be magic in the Jersey waters too because three Jersey stars all share the same birthday, December 12th: Frank Sinatra, Dionne Warwick and Connie Francis.

But back to the Four Seasons. Come the mid-sixties, they really held off the British invasion in the form of the Beatles,  the Stones, the Kinks and lesser luminaries that seemed to continually pound the American shores, groups (many forgettable) such as Herman’s Hermits, Freddie and the Dreamers and Manfred Mann. Frankie and his Jersey boys held on (to what they got) and ultimately sold 175 million records, many of them in an age when rock really took off and emerged into stadium events.

So, Jersey Boys has brought the Four Seasons back into the limelight. The production includes, so says the notes,  “authentic Jersey language” which to me should be somewhere between clearing your throat and Tony Soprano – blue collar, tough-edged, no nonsense. We’ll see.

As they would say in Passaic or Newark or Asbury Park: Whuttcha gunna dew ’bout it, anyways, eh?