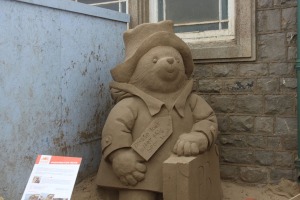 The Paddington Bear movie hit the screens in Britain this week. But as Sir Howard Elston (DOA) reports, the cute furry animal may be chucked out of the UK.

Border control bosses have confirmed tonight that Paddington Bear, that cuddly ursine hero who suddenly left Peru and landed at Heathrow without proper documents, may be sent home.

Documents seen by me and my staff reveal that the emerging film star landed in the UK without a passport.

“Technically, he is an illegal alien immigrant,” the source told me in a holding pen just outside Wolverhampton last night as we snacked on hard tack biscuits, cold oatmeal and lukewarm salted water. “That means the bear, no matter how cute, faces criminal charges under section 29 of the Immigration Act 1971.

“Plus, as a certain Mr and Mrs Brown gave the bear a domestic base, they further face charges under Section 25 of the aforesaid legislation. Those fighting for Mr Bear’s release because he is seeking refugee status are also in for disappointment. He is not escaping persecution and has not started a claim that he suffered as such.”

As for being a victim of a natural disaster, such as the Peruvian earthquake which he claims disrupted his jungle life, officials say he did not have to leave his home country to find safety. Coming to Britain was ill-judged and wrong.

Finally, supporters say since Mr Bear was arrested after PM Dave Cameron’s shop-a-neighbour policy was used to arrest him, the illegal immigrant animal, no matter how popular and beloved by one and all, will find himself possibly languishing in an immigrant centre in perpetuity unless Peru welcomes him back with open arms.

Phil from Leeds, a famed second hand car dealer and human rights activist said: “Send the bloody flea-ridden bear back. We got too many of those kind already in our septic isle.”