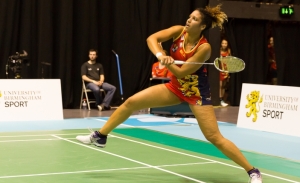 Have you heard of the National Badminton League? Did you know there is a professional badminton team right here in Birmingham?

The city has a long connection with the world’s fastest racket sport, having hosted the oldest and most prestigious badminton tournament in the world for the last twenty years. The Yonex All England Open Badminton Championships will be holding its 104th annual championships at the Barclaycard arena in March 2015 as part of a deal that sees the event in Birmingham until at least 2021, but that isn’t the only reason international professional players are venturing to Birmingham this year.

Badminton England has recently launched the first ever professional badminton league in the UK, which is being broadcast live on Sky Sports. The Birmingham Lions have made a great start to their title bid with an opening night victory over much fancied Team Derby in October. Birmingham fought back from a 2-0 deficit to win 3-2 in fantastically exciting fashion. The new five match format alongside the introduction of shorter, more exciting games and cleverly executed ‘Powerplay’ points (worth double) made the night a real spectacle.

The team itself is a joint venture between the University of Birmingham Sport and Birmingham City Council, who are looking to bring more world-class events to the city. When you consider that there are more weekly adult badminton players in Birmingham than there are tennis, cricket and rugby players you can see that there’s a market out there for this sort of event. Badminton is also a sport which uniquely transcends age, gender, economic and cultural differences to bring people from right across the city together in common enjoyment.

This mass appeal, however, is also the sport’s main weakness as there is little understanding and appreciation for badminton at elite level here in the UK; from Joe Bloggs on the street to the journalists who dismiss this piece for something more important badminton can’t get away from its poor reputation. 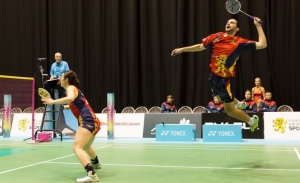 This may be changing though, as Sky Sports are not the sort of company to broadcast a sport for no reason. It’s reported that one-fifth of the world’s population tuned in to watch the Men’s Singles final at the London 2012 Olympic Games, a match between two of the best players ever, each from two huge Asian countries obsessed with the sport. As the world becomes a smaller and smaller place it doesn’t seem to be entirely coincidental that an event that can generate more viewers than the Olympic Men’s 100m final is on the radar for broadcasters like Sky, even if (or more likely especially because) most of these viewers will probably have been from Asia.

The popularity of the sport here in the UK is of course poles apart from Asia but everyone’s got to start somewhere What isn’t realistic is to hope the NBL magically generates interest out of nowhere. But I hope that the 16,000 badminton players in Birmingham and open-minded sports fans alike will give the NBL a try and see how they like it. It’s a great family event and with ticket prices at £12 for an adult and £5 for a student/Under 18 it’s a far cry from the vastly inflated ticket prices found at other live sporting events.

The next match, against Nottingham, will be broadcast live straight from the University of Birmingham’s iconic Great Hall on Monday 1st of December, doors open at 6:30pm and the team would love for every seat to be filled with Brummies cheering them on to victory. Why not give it a go?

To buy tickets go to www.sport.bham.ac.uk/nbl For more information go to www.nblbadminton.co.uk