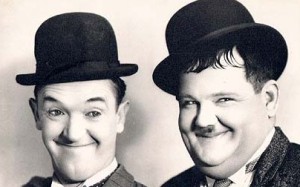 Two classic comedies from the most famous double-act of all time are heading to the big screen as part of the Birmingham Comedy Festival.

Released in 1927, Battle Of The Century concludes with a monumental, and expertly choreographed, custard pie fight, while 1932’s The Music Box finds Stan and Ollie struggling to deliver a piano to a pompous professor.

The films will be introduced by John Ullah, Grand Sheik of the Birmingham branch of the Laurel and Hardy Appreciation Society and author, who will also be discussing Laurel and Hardy’s links to the city. Says John: “We’ll be revealing Birmingham’s many connections to Laurel and Hardy, from cast member Charlie Hall – who was born in Brum and later appeared in nearly 50 of their films – to lost venues they appeared at in the city.”

Laurel and Hardy: Comedy Classics can be seen at mac birmingham on Saturday 11 October 2013 at 2pm. Tickets are £4 from 0121 446 3232 or www.macbirmingham.co.uk. Birmingham Comedy Festival continues until Sunday. For more information see: www.bhamcomfest.co.uk.