How many bands do you know can play to audiences of a quarter of a million ? Here’s another.

The Brew are a power rock trio in the grand tradition of Cream and Motorhead. Originally hailing from the unlikely environs of Grimsby, they’ve now released five albums and built up a reputation throughout Europe, playing with such bands as ZZ Top and Lynyrd Skynyrd and memorably playing to a crowd of 250,000 at Poland’s Woodstock festival earlier this year.

They’re performing at the Assembly in Leamington on 16th November. 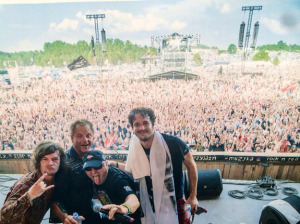 How and when did you all get together?
“2004. Kurt and Tim started jamming together and decided to do a gig a month. We now tour Europe for months at a time. Jason came on board about a year later when our guitarist of the time left.”

Which artists have influenced you?
“The Who, Zeppelin, Pink Floyd, Hendrix, Crosby Stills Nash & Young, and Kula Shaker”

When did the band really start to take off?
“2009, when we were asked to do The Rockpalast show in Germany, to be broadcast live on National WDR. It was alongside Joe Bonamassa, who for some reason best known to himself decided he didn’t want to have his set shown that night. So they asked us and the other artists on the bill, if we could do an extended set of an hour. It was amazing.”

You’re incredibly popular in European countries such as Germany and Poland.
“People in Europe of all age groups are still looking to seek out new music and are prepared to pay to see it, whether it has been hyped in the media or not, they seem to support all forms of art and culture. I think they look upon going to a gig as a great social event. The UK was like this in the seventies with touring bands, but has been in steady decline since, and that’s a shame, as Europe still regards the UK as the home of rock’n’roll yet touring bands have such a hard time here getting in front of an audience.”

Have you had any special experiences when playing abroad?
“So many! Having met so many legends, and meeting so many passionate and fantastic people, we toured with ZZ Top, Lynyrd Skynyrd, played with Jeff Beck, Joe Bonamassa, Chad Smith, the list seems endless, and we’ve had the time of our lives. If you name it we’ve probably been there and played it. Kurt receiving an award for being Voted in the Top 3 Drummers, and Jason for being voted in the Top 3 guitarists in Germany and the band as a whole as one of the top 3 Live acts. Those memories will never leave us.”

What is the biggest audience you’ve played to?
“Live, 250,000 at the Woodstock festival in Poland this year. It’s the largest festival in Europe and one the largest in the world. 750,000 attended over the three days, it was insane.”