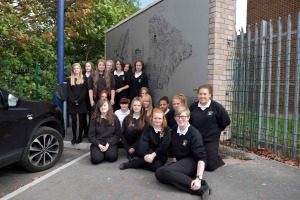 A new car park in Longbridge has a permanent reminder of the area’s once mighty car industry thanks to a local school which went bats for the project.

The Park and Ride site in Longbridge Lane has a mural designed by students at nearby Turves Green Girls School covering a bat wall. As well as giving a visual record of the area’s history it also provides a home for a colony of bats that had been living in derelict houses which previously occupied the site.

When the houses were demolished by Centro last year the regional transport co-ordinator decided to erect a wall with secure recesses in which the bats could roost. It then commissioned Turves Green Girls to come up with a piece of art to place on the front of the structure.

Working under the guidance of Kidderminster artist Mark Renn of Mark Renn Associates, they provided a design in the outline shape of a bat which told the story of Longbridge. The design was applied to sheets of metal which cover the front of the wall.

Mark said: “It was a challenging project but the girls’ enthusiasm and hard work meant it turned out very well. It wasn’t just about bats, it was about capturing the heritage of the whole area and the way the girls rose to the challenge was fantastic.”

Sarah Barton, head of art at Turves Green, said the project had been a hit at the school. “The project was a great opportunity for those girls who had opted for GCSE Art to work on a live public art brief alongside professional artists,” she said. It was very popular even amongst students who had not opted for GCSE Art and so we invited them to apply to take part as well.”

The work has now been formally unveiled in a ceremony on September 25, with the girls signing their names on the mural.

Cllr Roger Horton, Centro lead member for rail and Metro, said: “This is a superb piece of work and I congratulate the girls and the artist on their imagination and hard work “Longbridge was world famous for more than a century for its the cars. Sadly Rover is no longer with us but the mural provides a reminder to everyone using the car park about what was once here.”