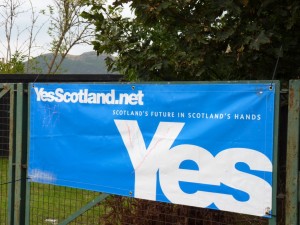 John Knox, who until recently covered Scottish politics for the BBC, files this report.

In two weeks, Scotland will decide if it will go it alone. If it does, everyone in the UK will be affected. If Britain is breaking up, it is doing so with some excitement. The Scottish referendum on 18th September looks like being closer than anyone imagined.

The opinion polls show 45 per cent support for independence and the gap is closing fast. All around my ex-council estate, the blue Saltire is flying and Yes posters are going up in the windows. Public meetings are packed out.

The politician are out on soap-box tours of the country. Alex Salmond appears in a different factory in a different town every day. His deputy Nicola Sturgeon has just taken the slow boat to Shetland.

On the No side, Labour’s Jim Murphy has resumed his street-corner tour of the country. He had to call it off for a couple of days after being pelted with eggs and shouted down in Kirkcaldy.

The Prime Minister continues to make quick forays north of the border to remind us how important it is to stay British. The trouble is that “British” at the moment means – to many Scots – austerity, low wages, the bed-room tax and threats to the NHS.

The media is obsessed, as Scots often are, with money. What currency would an independent Scotland use ? Alex Salmond has made it crystal clear that he would prefer a monetary union with the remainder of the UK in which Scotland would take on its fair share of the national debt. And the more the London politicians say we can’t do that, the more Scots are saying “Yes we can.”

In fact, the more the No side say No – to a common currency, to pension protection, to defence contracts – the more Scots are likely to say; “Sod it. We’ll just go it alone then !”

Several months ago, the No side promised to be a bit more positive, to emphasise their slogan of “Better Together” but there’s been little sign of any conversion.

In his big TV debates with Alex Salmond, the leader of the No campaign, Alistair Darling, continued to ask awkward questions instead of spelling out how Scots would have their aspirations met in a post-referendum United Kingdom.

It’s been clear from the start what most Scots really want….more home rule or devolution. But more powers for the Scottish Parliament within the United Kingdom was knocked off the ballot paper by the unionist parties in the hope of killing the SNP’s crusade for independence “stone dead”. The tactic hasn’t worked. In fact it’s within a whisker of backfiring. And instead of spelling out what additional powers the Scottish Parliament may have in the event of a No vote, the unionist parties have remained divided and somewhat confused over what they are prepared to offer.

There is often confusion, for instance, over whether Scotland is a nation at all. This referendum campaign has been a searing experience for us all, no matter which side we are on. It has forced us to ask the question: what sort of country do we want to be? Fairer? More equal? Anti-nuclear? Environmentally friendly? Centralised or localised? Large public sector or small public sector?

And no matter what the result on 18th September, these questions will not go away. We are changed for ever.

One thought on “Independence Vote: A Fortnight To Go”