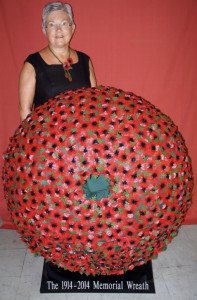 A large memorial wreath created from 454 individual handmade beaded poppy brooches to commemorate the 100th anniversary of the First World War, is being displayed at the National Memorial Arboretum in Staffordshire for four months from August 3rd.

The wreath is the inspiration of Pam Kirk, a crafter from Castleford who has been supporting The Royal British Legion’s Poppy Appeal since 2010 when she was saddened by the plight of returning soldiers from Afghanistan. Each beaded poppy within the wreath represents one British military life lost in Afghanistan since 2001 and there is also a poppy to mark the tragic death of Lee Rigby on the streets of London in 2013.

Pam designed a pattern that can be used to make the beaded poppy brooches in a variety of colours, which she sells with 100 per cent of the profits going to The Royal British Legion’s Poppy Appeal. Sales of the patterns and a few ready-made brooches have already raised a staggering £25,000. Each of the beaded poppies takes 20 hours to make and consists of an incredible 2,500 beads.

Since January 2013 Pam has taken the project to another level, asking beaders to create brooches that can be made into one large memorial wreath. In fact, her request for beaded poppies has gone global, with many of those who had already bought a pattern and created a beaded poppy for themselves volunteering their time to create another one for the memorial wreath. Pam supplied the thousands of beads and has had finished poppies returned from every part of the UK, USA, Australia and Canada. Many of the beaders sent her heartfelt letters, with some having created the poppy to remember their own son or daughter lost in conflicts past and present.

Pam has created a project book to accompany the wreath for visitors at the Arboretum, which is part of The Royal British Legion family of charities, to see the journey of this beautiful symbol. It includes the name of every beader who has made a poppy as well as the many organisations and institutions who have helped in its production.

Mia Senior, the Legion’s community fundraiser in South and West Yorkshire, said: “Pam really is an inspirational lady with such passion and drive. Her achievements are incredible, not to mention the amount of money she has already raised for the Poppy Appeal. On behalf of the Legion, I would like to take this opportunity to thank her very much for all her hard work and dedication over the last few years.”

Sarah Montgomery, managing director of the National Memorial Arboretum added: “We are honoured to be displaying this wonderful work of art which is so beautiful and meaningful and we have no doubt that our visitors will be impressed and moved by it too.”

Towards the end of this year, each of the beaded poppies will be sold for a minimum donation of £30 which should raise another £15,000 for the Poppy Appeal. For more information or to purchase a poppy, email: pam@pamspoppy.com

The Arboretum is open daily and is free to enter, although donations are appreciated. For further information visit: www.thenma.org.uk or email info@thenma.org.uk.